The Clown Is Real 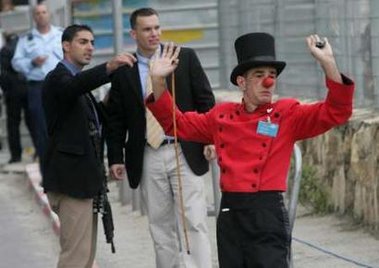 A man dressed as a clown gestures as Israeli Prime Minister Ariel Sharon's bodyguards survey the scene outside the Hadassah Ein Kerem Hospital in Jerusalem December 20, 2005. Sharon left hospital on Tuesday after being treated for a mild stroke, saying he planned to return to work soon. REUTERS/Ronen Zvulun

It's a cute picture. I probably wouldn't comment on it, except that I've met that "man dressed as a clown".

If you look at the picture and let Reuters' psychological conditioning take over, you will probably assume one of the following things:
Sure these are all possible, even plausible explanations but none of of them is really the case. This is no "man dressed as a clown" -- he is a clown. I've seen him work the hospital halls in the kids' wards, cheering up the sick children and a few parents too.

Further, as far as I know, he is not really under arrest for that metallic switch in his left hand. He's probably just clowning around with security or the Reuters artistic staff.

Still, you might wonder what that suspicious thing in his left hand actually is. Well, that thing is... well it's... you have to understand -- he works in a kid's ward. Entertaining children. So basically he walks around the ward, talking to the kids and getting them to laugh by making certain... noises... with the assistance of that thing in his hand. You know.

They're actually quite funny. I even laughed, a little. Don't tell my kids though.

Now leave the clown alone, he's got work to do.