The Double Zeros: Connery and Peres

My friend Larry insists that this image (Reuters, via Haaretz) must be captioned, and as usual, he's right. 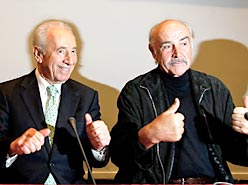 We'll let Larry start us off: