Gates of Vienna Should Have Fallen

So the famous Battle at the Gates of Vienna, the fight in which the invading Muslim army was finally turned back in 1683, turns out to have been winnable for the Muslims after all -- they just didn't know it. The Turkish commander, Grand Vizier Merzifonlu Kara Mustafa Pasha, assaulted the great walled city, but was unable to enter its gates. Had he succeeded, the course of history would have been drastically altered.

In those days there were many ways to attack a castle or walled city: 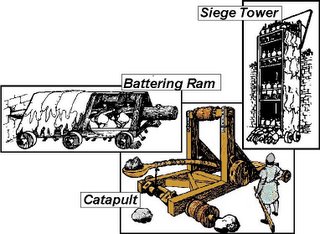 In the end, the invading Islamic forces chose instead to destabilize the walls by digging under them and blowing up explosive charges. It didn't work. The walls held long enough to turn back the invaders.

And thus an historic opportunity was lost, the chance for a golden Islamic age of peace that was never to be, history's canvas splattered instead with the blood of three more centuries' senseless resistance to unrelenting Jihad. The peace so many have yearned for, possible only in an age of Islamic supremacy, was forced to wait for the steady plodding progress of human rights to make it possible. Basic human rights, like the right to resist occupation (or not, depending on who the occupier is), the right to self-determination (or not, depending on who the self is), and the right to march in protest with stupid signs and have the world take your every grievance seriously.

If only the Turks had known how easily defensive walls can be breached if it is done the right way. But they never realized their greatest weapon wasn't a catapult or a barrel of explosives. They never even wielded their greatest siege weapon: their inalienable human rights. How different things could have been:

Alas and alark, it just wasn't meant to be. Fortunately for the cause of peace -- the kind of peace unbroken by infidels except to pay their tax on time -- this is a world that believes in second chances. Here's hoping we get it right this time.