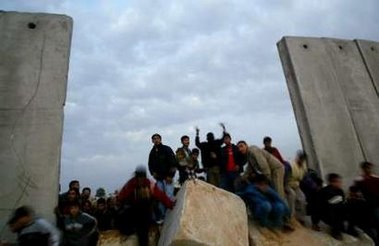 Palestinians stand next to broken barricade between the southern Gaza Strip's borders with Egypt, in Rafah January 4, 2006. Palestinian gunmen using a bulldozer smashed through a barricade on the Gaza Strip's southern border with Egypt on Wednesday, firing in the air, witnesses said. REUTERS/Ibraheem Abu Mustafa

I look forward to coverage of Israel's heinous security barricade in the near future.