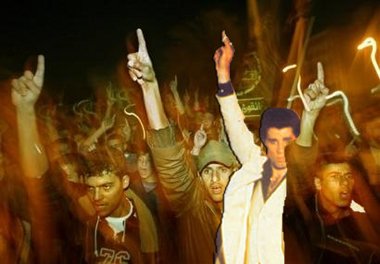 Palestinian supporters of Islamic Jihad get down and boogie as they take part in a disco demonstration in Gaza City, Tuesday Jan. 3, 2006. Islamic Jihad, unlike the militant group Hamas, will not take part in the big Palestinian disco dance contest to be held later this month. (AP Photo/Hatem Moussa--click image for original caption and pic)

After the dance, in a message to Ariel Sharon, prime minister of the neighboring Jewish state, Islamic Jihad spokesman Tony Manero warned, "Would ya just watch the hair. Ya know, I spend a long time on my hair and he hit it; he hit my hair." Apparently slightly confused by the disco lights, Mr. Manero threatened cryptically, "Sometimes you don't have to kill yourself in order to kill yourself."