I made the mistake over Shabbat of reading the newspaper, and now I'm so depressed that I'm reluctant to post anything for fear of bumming everybody out, majorly.

So rather than post anything myself, I thought I'd bring in a guest blogger to keep things moving around here. Does anyone still remember the ultra-famous Dr. Jack Badofsky? 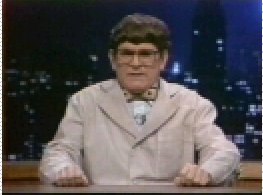 About 20 years ago Dr. Badofsky made some ground-breaking appearances on one of America's most respected news programs -- SNL's Weekend Update, no less -- in which he described numerous cutting-edge diseases he'd personally discovered and named:

Dr. Jack Badofsky: A- A- A lot of doctors are telling you how dangerous the summer sun's rays can be. So here's my summer tip: watch out for creatures that are foaming at the mouth. That's right. Summer is a prime time for abdivorus, commonly known as rabies.

[holds up a stack of cards, which he reveals one at a time] 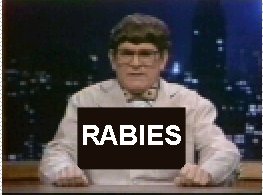 "Rabies." But I doubt that you are aware of the many strains of rabies that you can fall victim to. For example:

Well, Dr. Badofsky has finally emerged from seclusion after two decades of intensive retraining for a fabulous career as a Hollywood movie mogul, and he has requested the opportunity to appear here in order to advance his first Hollywood business venture. Doctor, the microphone is yours.

Dr. Jack Badofsky, Esq: Thank you very much Abba-ba-ba-Gav. For many decades, if you wanted to see a film that was like real life, only more so, you came to "Hollywood." 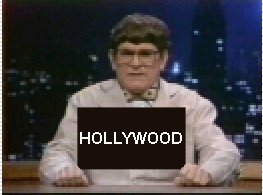 Then the muckity-mucks in Bombay got into the act so that if you wanted your entertainment to show authentic real life, but with unpredictable outbursts of singing and dancing thrown in, you would go to "Bollywood."

Recently, I've been seeing some even newer variations on the styles of real life that are presented to us on film. For instance, if you like to watch film that appears real, except that Palestinians are always victims of baseless and wanton Israeli aggression, you would enjoy "Pallywood."

Even more recently, if your tastes run to things like men in green helmets and your prefer your reality retouched, you should probably give "Hezbollywood" a try.

But there are so many more versions of reality to film, and I'm sure at least one or two will someday find a paying audience. So I am hereby legally claiming ownership of every possible future variation on the Hollywood theme in the hopes that I will eventually be able to afford a steak dinner at Denny's by suing someone:
If the situation should arise that you find a profitable commercial use for any of these terms -- completely owned and incorporated by me, Dr. Jack Badofsky -- please make out a check to Mr. AbbaGav and he will see that the funds are forwarded to me somewhere deep in the forest. Thank you.