Immigration or Conquest, Absorption or Surrender?

When a People immigrates to your country and demands you accommodate their lifestyle and principles by abandoning your own, it's no longer called immigration, it's called conquest.

Immigrants have moved from country to country for at least as long as there have been countries, and sure, each migration has had its impact on the new host. Anyone who thinks a country can absorb large numbers of new citizens and not be affected by the process is being unreasonable. But the immigrants' impact occurs through being mixed in with what was there before to create a new whole, not by demanding the hosts adapt themselves to the incoming culture.

Obviously, many Muslims are successfully being absorbed in their new homes. But many are not, and in some countries, it may even be that most are not. There are signs things aren't working out like previous waves of immigration. 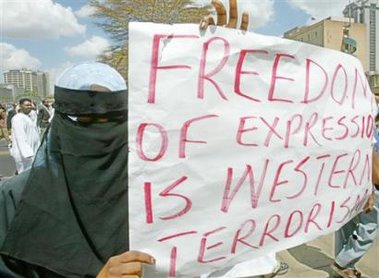 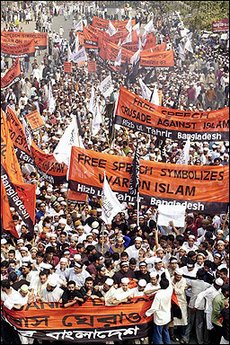 Protesters complaining about the Philadelphia Inquirer's republishing cartoons of the Muslim Prophet carried similar demands, but with more subtle phrasings:

A large banner proclaimed: "Humiliating Prophets is not Freedom of Speech."

The demonstrators carried signs that read, "Freedom of Speech, Not Irresponsible Speech" [...]

What we have is the spectacle of people from countries that have never known Freedom of Anything angrily lecturing democracies about the finer nuances of what Western freedoms do and don't include. And it's disturbing to see our media dutifully taking notes rather than standing up and explaining that these freedoms have already been working pretty well over the last few hundred years, thank you, even without the helpful clarifications of how to run a democracy more like Saudi Arabia.

But it's far more comfortable for the elite media to simply take the protesters' word for it, accepting it's the West's job to reduce its liberty in order to absorb rather than the immigrants' job to adapt. It's easier and safer to simply not print images than to face the mobs and try to explain how freedom actually works.

So once the various editors have finished internalizing the full list of exactly which blasphemies their new-found freedom of expression now prohibits, they can return to peaceful slumber, confident they've bought off the wolves and preserved the remainder of their liberty, at least for now. They can lecture the rest of us about tolerance, fully expecting the no-longer-needed protest placards to be tossed away on a bonfire of burning Danish flags.

However, having caved once, no one should really be surprised when next year there are whole new sets of protest placards printed up making new and evermore reasonable claims of ownership on the definition of more of the West's essential freedoms: 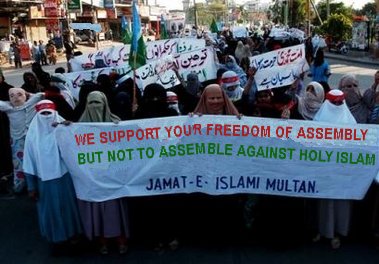 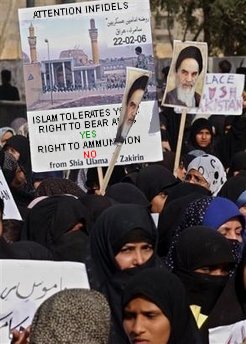 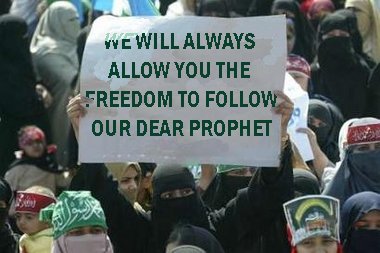 Perhaps I exaggerate. But as long as the protesters have the sense not to even try to touch abortion rights, they have a decent chance of building a nice little Caliphate out of what were once free lands. You don't accomplish that by immigrating; it takes carefully calibrated conquest.

And we'll probably barely even protest.