AP's Got Your Back

Let's start by briefly reviewing an older story you probably don't remember anymore -- it's ok, you weren't supposed to remember it, except to file away an impression that Israeli forces are brutal, AP-journalist-murdering goons. It was over three years ago now that an IDF bullet took the life of an AP journalist

Almost two weeks ago, a Palestinian cameraman was killed covering a clash between Israeli forces and armed Palestinians and stone-throwing youths in Nablus, on the West Bank. During that clash, witnesses accused an Israeli soldier of targeting the cameraman and shooting at him.

The IDF rejected that charge, saying the cameraman was standing in a place where armed Palestinians were also hiding.

That cameraman, who normally worked for Palestinian Television, was freelancing for Associated Press Television News the day of the shooting, April 19.

If the IDF at the time disputed the circumstances, no one remembers it or gives it much credence, since of course they would lie to save their own skins. Does anyone really believe an AP cameraman would be stupid enough to sand right where armed Palestinians are hiding? Or that Palestinian militants would be so unscrupulous as to endanger a journalist by intentionally positioning themselves near him?

Besides, as the story so clearly pointed out, this was not the only journalist killed by IDF thugs in that two week period. If Palestinian witnesses are to be believed, and of course they are to believed, this is all because IDF thugs go out of their way to target neutral, by-standing journalists. This happens not because of journalistic stupidity and complicity, nor militant malfeasance, but simply due to deep-seated Israeli brutality.

Earlier unbiased studies of journalists killed by the IDF make it absolutely clear: these journalists (with one exception) are not being killed for standing in the middle of the battle. Most importantly, militants are NOT taking shelter behind the journalists:

These points of received truth were on my mind as I saw the following AP photographs out of Gaza. For while Palestinian militants may not be taking shelter behind journalists, there are other ways to go about getting journalists killed by IDF bullets: 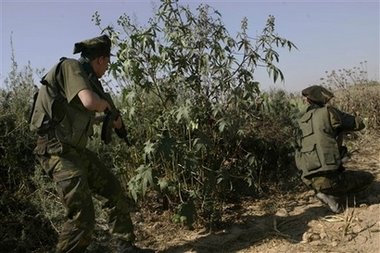 I do pray Mr. Morenatti is still alive and well, but he must know that the life expectancy of those hiding in the bushes with camouflaged Palestinians looking to ambush Israeli troops isn't great, even if one is holding a camera and carrying an AP press pass.

Perhaps Mr. Morenatti was yelling "Don't shoot! I'm a journalist!" as he and the militants crept through the bushes toward IDF troops, secure in the knowledge that humane Israeli troops would never return fire at armed militants once it was clear they were hiding with a journalist who could be hurt.

No, no, of course that can't be it, since everyone knows Israeli troops go out of their way to murder even bystanding journalists who are nowhere near active combatants. No, this was probably just a one time thing, a fluke, an accident. Surely Mr. Morenatti and the militants with whom he skulks don't want him getting shot. I'm sure they're all much more careful other than this one time. 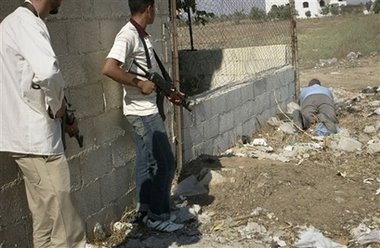 Ok, maybe it's just a two-time-thing. A couple of flukes. A pair of accidental co-positionings. But at this rate, Mr. Morenatti is going to get his name immortalized in several thousand stories condemning Israeli brutality, and possibly have an award for journalistic courage named after him, even if it is posthumously.

Of course he might have been wiser not to globally publish these photos before shooting for that kind of fame. I'm surprised the militants allowed it. It makes their PR work that much harder when it's time for the world to visualize Mr. Morenatti getting shot for no reason.