I ran across this picture of a Palestinian "militant" taking a carcinogen break: 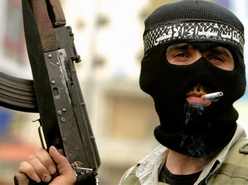 A Palestinian militant from the Al Aqsa Martyrs' Brigades smokes during a demonstration against the speech of Khaled Mashall, head of Hamas' political bureau in Syria, in the West Bank town of Ramallah, Saturday April 22, 2006. In their sharpest power dispute yet, Palestinian President Mahmoud Abbas on Friday blocked Hamas' plans to set up a shadow security force, which was to be made up of militants and to be headed by the No. 2 on Israel 's wanted list. (AP Photo/Muhammed Muheisen)

And I was struck by the fact that these guys may not be fully aware of the scope and severity of the Surgeon General's warnings about tobacco products. Of course in America and much of the West even the Marlboro Man knows better these days: 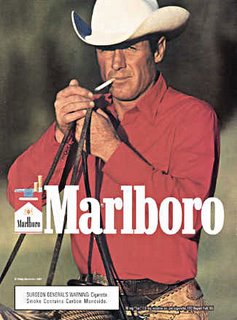 But wait! It suddenly dawned on me. How much could billboard space in Gaza and the West Bank cost? They're probably giving it away.

So here is my revolutionary proposal.

We pursue a low-intensity, long-term strategy of ultimate victory in which every Palestinian militant will slowly but surely be killed. The trick is to couple low-tariff tobacco imports with a perpetual advertising campaign in all major Palestinian terror centers for the next 20 to 30 years: 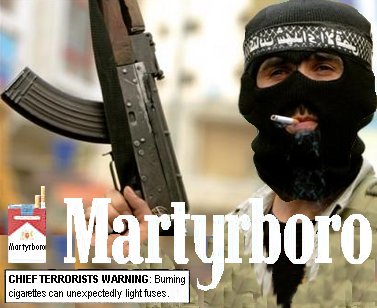 If the IDF doesn't get them, the lung cancer will.

Now we just have to convince the Europeans that tobacco ads aren't war crimes -- even when paid for by Israelis. But I think they still smoke in Europe, don't they?

By the way, please do not misconstrue the presence of any images of cigarettes in this blog as any form of encouragement to smoke -- unless of course you are a Hamas, Fatah, or Islamic Jihad terrorist, or militant, or activist, in which case puff away my friend.

Linked with thanks to: Point Five, Crazy Rants of Samantha Burns and Stuck on Stupid