The Hazards of Quick Questions

We did our annual trip to Superland, an Israeli amusement park, today. (For a little background on Superland, see my post about last year's Superland trip).

Anyway, the day started out pretty much like most of our recent trips to the amusement park: a little cotton candy, signing Sharon up for the free 15 minute massage -- her company springs for extras when they rent out the park -- getting the kids on the Merry-Go-Round and keeping Abba off the Tea Cups -- lot's of fun for everybody.

Sharon loved her massage. She had a new kind she'd never had before and was all aglow. She told me she'd had a Tijuana massage. Now, I'm from Southern California, and to me that sounded like something the frat boys get while on spring break for about 10 dollars a pop and the price of a penecillin prescription. Well, I gave her a strange look, but it turns out what she actually said was Tuina massage. Oh. Like I'm supposed to know these things. I'm still figuring out where to mentally file her recent Spanish Inquisition massage.

Later, after lunch, my oldest daughter Rachel and I decided to see if her new status as a nine year old would be enough to get her on her first ever roller coaster ride. Sharon and I were fine with this, because developing a fondness for rollercoasters would at least keep her off the mile-high bungie-cord Free Fall until she was well into her thirties. Rachel has been the adventurous one in the family since she was small enough to consider changing her own diaper an adventure. Needless to say, one look at Superland's Free Fall ride on our first visit those many years ago was enough to convince us even then that we'd need a lifelong strategy to keep her off that thing.

So off we headed, Rachel and I, to the roller coaster.

On the way we had to pass the Free Fall and I had a sudden thought. I wondered what exactly was the guideline for getting on it. I'd never seen anyone younger than about 18, at worst 15, going on it. So maybe we didn't need to worry about keeping her away from it. Maybe it was simply forbidden to one so young and would remain so for many years with no further machinations on my part. So I detoured about 10 feet off the roller coaster path to ask the Free Fall guys one simple quick question.

It turned out that you have to be one meter and ten centimeters tall.

Unfortunately, although I've lived in a metric country for 10 years now, and I majored in physics so I know the speed of light in both meters per second and centimeters per fiscal quarter, I couldn't figure out how many years of growth it would take Rachel to reach that height. So I followed up with one more quick question, asking roughly how much taller that girl over there -- yeah, that one -- had to be. I was hoping to hear she'd need about 30 or 40 years more growth.

Well, I can't remember exactly how it happened after that. One thing led to another, as it often does when the questions are asked quickly, and the next thing I knew, our names were on The List of people waiting to go on the ride. Now I have to be clear, that was NOT my intention. Not only did I NOT want Rachel to go on the ride, but I myself wished to remain as far from it as possible. One big reason I wanted to keep Rachel off the ride was so I wouldn't even have to look at people plunging to their likely deaths, only to be saved from an early splattery grave at the very last second by the tug of an perilously thin bungie cord -- bungie cords are those things that can't even keep a couple school books fastened to the back of a bicycle, if memory serves me.

Yet somehow our names were now on The List.

So we were standing around, and I was trying to explain to Rachel exactly how it happened, and it was taking awhile. I was trying to get her to recognize that it was probably scary and a host of other potential problems -- like the fact I had just finished lunch, and that a nine year old girl probably isn't ready to have THAT on her head.

I admit, I probably should have been able to convince a nine year old girl to run away screaming from that ride, given that all those 18 to 25 year old guys -- many of whom were probably brave veterans of the IDF -- were all screaming at the top of their lungs as their turns came up to plummet. But oddly enough, the more they screamed, the longer it took me to talk her out of it. And of course one thing continued leading to another until they called our names to get suited up.

That's when Sharon showed up.

Yes, I think she was a little surprised to see her little daughter getting suited up to drop from the height of maybe a 20 or 30 story building. I tried explaining to Sharon how this big misunderstanding had come about, but maybe I was a little nervous about taking the plunge myself; it just wasn't making as much sense in the retelling. So Sharon wandered off in disbelief to take a few pictures of the impending carnage, probably for insurance purposes, while I tried to at least convince Rachel to keep a stiff upper lip in the face of this unexpected trauma. 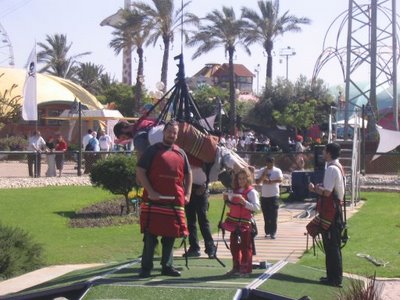 They brought us out to a raised platform to connect our plummet-suits to the bungie-cord. That was when they explained that it was going to be Rachel's job to pull the release line at the top that would free the connection and send us hurtling toward the ground. I breathed a sigh of relief. There was no way a nine year old girl was going to be brave enough and level-headed enough to find the release line while dangling 300 feet in the air, let along pull it to make us fall to the crushing earth below. Then they could just bring in the emergency crane, or helicopters -- or whatever it is they use for these crises -- to rescue us.

They pulled the platform out from us, leaving us dangling. I had a quick thought that maybe I could ask for them to call in the emergency crane right away and just spare everyone the inconvenient "300 foot" part of the rescue. 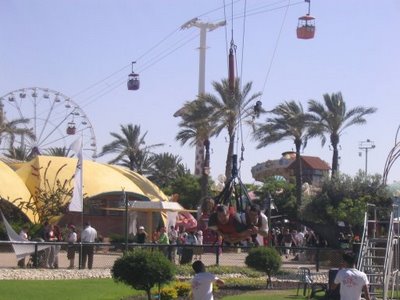 But before I could get the operators' attention with my simpler alternative rescue plan, they were already cranking us up into the sky. 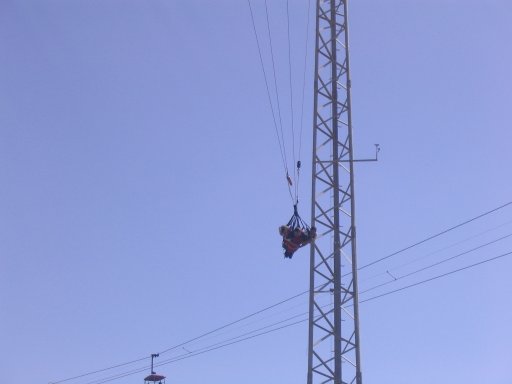 And then, after they had us up in the sky, they kept on going until we were in danger of affecting commercial airline flight paths: 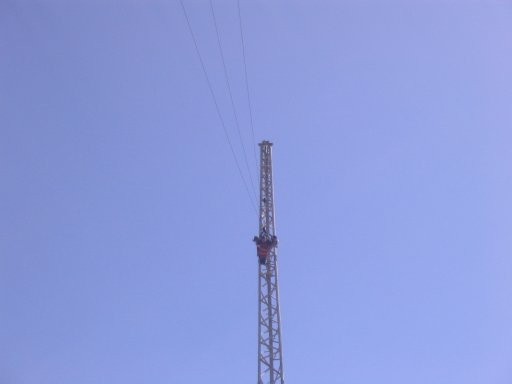 Ok. So they were going to need the tall crane to rescue us. I confess I was dwelling on such matters as how they might bring the crane in to get close enough to reach us, and so I wasn't paying total attention to Rachel and that release line. That's probably one more lesson I can offer any parents out there: always pay attention to nine year old girls who have their hands near the bungie cord release line when you are dangling at 300 feet.

I'd like to report that her little-girl screams were not too horrendous, thanks to the presence of her much loved dad and the feeling of overwhelming safety I provided her, even as the ground was rushing up to crush her little body. But I can't.

It's because I was surprised. I didn't realize she was actually going to pull the darned thing. One second we're dangling there, quite peacefully actually, waiting for the crane to come. And the next thing I know, the wind is rushing past me and I'm screaming like a colicky baby with diaper rash. Meanwhile, my little nine year old girl plummeting next to me isn't making a sound. Not a peep. The entire time we waited in line, witnessing the near-death experiences of probably 50 brave young men and a few women too, I never once heard anyone who made less noise than Rachel, or more noise than me.

I'm happy to report that when I finally opened my eyes, I was still alive and so was Rachel. I guess the bungie cord miraculously worked one more time - how they can be so sure it isn't going to fail is beyond me.

In two years, when seven year old Tamar is a few centimeters taller, she can take the plunge with Sharon.