Oprah:
You all may have been taken in recently by a blog that appeared to be offering episodes of my show online, and maybe you didn't realize the whole thing was just one gigantic fraud. Well that blogger, AbbaGav, is here in the studio with me and I have to say, AbbaGav, it is difficult for me to talk to you because I feel really duped. 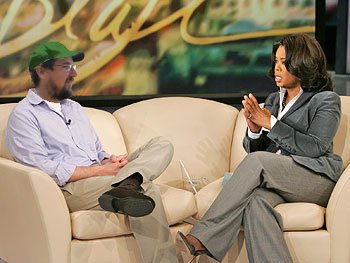 Oprah:
Now, as I sit here today I don't know what is true and I don't know what isn't. So first of all, I wanted to start with your "Oprah's Jenin Week" series my lawyers have been telling me so much about. They are saying you invented an entire week's worth of FAKE Oprah shows and put them out on your blog looking as if they might really have happened, and I want to know -- were they right? You did that?
AbbaGav:
Well, yeah. I did put up a week's worth of posts pretending you were broadcasting from Jenin. But it was parody. Everyone knew it wasn't really you.
Oprah:
Uh huh. Parody. Everybody knew -- which explains the worried calls from Steadman wanting to know if I was ok. Correct me here, AbbaGav, if I'm mistaken, but isn't parody actually supposed to be funny?
AbbaGav:
Sure, that is one kind, if you want to take the easy way out. I specialize in the other kind. I do parody with a purpose, even at the risk of being excruciatingly not funny. I maintain some very important core principles on my blog -- which, by the way, can be reached on the web at abbagav dot blogspot dot com...that's A-B-B-A-G-A-V. For instance, I'm trying to highlight some of the problems in this region, and what better spotlight to shine in a dark corner than the always-illuminating Oprah show?
Oprah:
Oh, I hope you didn't lose too much sleep thinking that one up. That line has got to be one of the most pathetic jobs of butt kissing I've experienced in quite some time, and believe me, this butt has seen more than most. From where I'm sitting, I don't see principles; I just see a crass, attention-craving web-traffic junkie trying to drum up readership by using and abusing the Oprah brand. But more importantly even than that, I feel that you betrayed the millions who visited you and read those blog entries -- millions of my fans. I think it's such a gift to have millions of people to read your work and that bothers me greatly.
AbbaGav:
Well, I only WISH I'd betrayed millions of your fans.
Oprah:
Well you're not alone there, let me assure you.
AbbaGav:
But in fact, I'd have to say my traffic actually even dipped a bit while I was running my -- admittedly untrue -- Oprah series.
Oprah:
Still, if not millions, you offended hundreds of thousands of my loyal viewers -- people who PUT THEIR TRUST in the truth of your writing and the wisdom of your words.
AbbaGav:
Er, not exactly.
Oprah:
Tens of thousands then.
AbbaGav:
Oprah, if lampooning you had brought a mere thousand of your viewers to my blog I'd have been an Oprah fan for at least a month or two out of gratitude, and might even have purchased one of your books.
Oprah:
But we're still talking several hundred, right? Where Oprah goes, or is just perceived to go, her viewers follow.
AbbaGav:
I don't mean to hurt your Q-rating Oprah, but your neon name mustered no more than my blog's usual 150 or so readers a day, and half of them were searching for -- and not finding -- various forms of middle eastern porn.
Oprah:
Ok, so you betrayed the trust of seventy five people each and every day that series ran. How does that make you feel?
AbbaGav:
Pretty disappointed actually. Kind of second guessing myself, wondering if I could have done anything different to sell the thing a little better.
Oprah:
That doesn't sound like remorse to me. 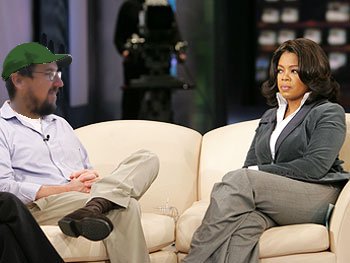 Oprah:
Ok, let's get past this petty squabble over this or that number of readers or viewers. I just don't think my millions of loyal fans want to roll around in that kind of muck with you and your tiny audience. But do you know what else gets me about what you did to me here? You set me up as the bad guy in your little territorial tantrum with your neighbors, or at least painted me as the naive dupe who's too dumb to know when she's being used.
AbbaGav:
Believe me, I tried to go easy on you. I don't have a big grudge against you or anything. Compared to what I did to Britney or Paris I think you got off easy. But that's parody. That's the whole idea of it.
Oprah:
No, the lie of it. That's a lie. It's not an idea, AbbaGav. That's a lie. You don't even know me. Admittedly, you've scarcely even watched my show except a few times just to cherry pick a mannerism or two to make fun of.
AbbaGav:
Perhaps. But if you're not being naively used, then you might want to clean up your "Oprah" website which, as we speak, still says**: "In the Middle East, Palestinians and Israelis have been fighting over the same holy land for decades. Israel has occupied Palestinian lands since the independent struggle of Israel in 1947 and 1948 -- both nations have been fighting over rights to the territory ever since." I'm sure it's just an oversight you'll correct right away, since you wouldn't want to naively appear to endorse, even accidentally, the view that Israel has been an occupier since 1948 and has no right to exist even inside its original, UN-approved borders. 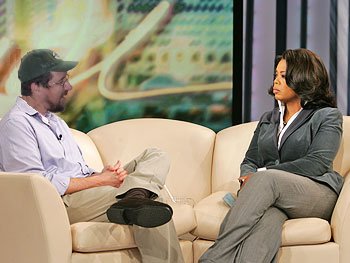 Oprah:
Well, of course I'm not the adminstrator of the web site, but fair enough. Then there is the last point I wanted to clear up with you. I've worked SO hard for decades to build up brand name awareness around the novel concept of selling a universe of content to a global audience using a single, vowel-initiated name for easy recognition. Do you have ANY idea how much it hurts to have you Yanni-come-latelys just waltz right in here and set up your fly-by-night blogs with, yes, single vowel-initiated names for easy recognition? There's you, Instapundit, Iowahawk, Israellycool, IMAO (however you pronounce that one). But does a single one of you give a shout-out to old Oprah over here, who paved the way for your easy success?
AbbaGav:
I guess I could add a space between Abba and Gav if that would make you feel any better. And by the way, your readers can also find me just by googling for AbbaGav, in case they don't remember the whole blogspot thing. They could even do that right now, if they're worried about forgetting it before the show is over.
Oprah:
Ok, I appreciate you and your principles being here because I believe the truth can set you free. I realize this has been a difficult time for you … maybe this is the beginning of another kind of truth for you.
AbbaGav:
I think you're absolutely right. I mean, I think this is obvious, this hasn't been a great day for me. It certainly hasn't been a high traffic week for me. But I think I come out of it better. I mean -- aside from being able to brag about having been on your show and use it as an implicit endorsement of my work -- I feel like I came here and I have been honest with you. I have, you know, essentially admitted to…to lying for my craft.
Oprah:
Which is not an easy thing to do.
AbbaGav:
No, it's not an easy thing to do in front of an audience full of people and a lot of others watching on TV. I mean, if I come out of this experience with anything other than a brief blip of Oprah searches on my statcounter, it's being a better person and learning from my mistakes and making sure that I don't repeat them unless I'm certain the traffic -- at abbagav dot blogspot dot com -- will be worth it.
Oprah:
Good. Ok, next up, our series on Celebrity Pet Makeovers. Don't miss it.
==========================

** If the link doesn't work, try this one and then click the "how can we learn from it" link found there.

Linked with thanks to Pirates! Man Your Women, Point Five, Third World County and Stop the ACLU.