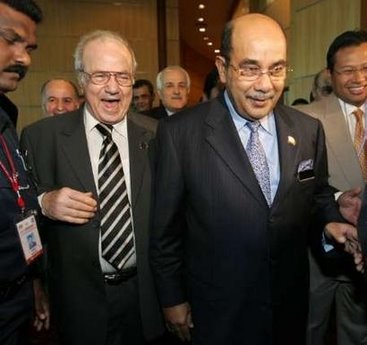 The head of the political wing of the Palestine Liberation Organisation Farouk Kaddoumi (L) and Malaysia's Foreign Minister Syed Hamid Albar arrive for the Ministerial Meeting of the Non-Aligned Movement (NAM) Committee of Palestine and NAM Caucus in the Security Council during the Ministerial Meeting of the Coordinating Bureau of the NAM in Putrajaya outside Kuala Lumpur May 28, 2006. REUTERS/Bazuki Muhammad

One glance at this picture and it was obvious to me something big is afoot amongst the international movements most supportive of the Palestinian causes, including the Non-Aligned Movement. How else to explain the use of a celebrity body double for PLO "political head" Farouk Kaddoumi? The man pictured is clearly not Farouk Kaddoumi but either Rupert Murdoch: 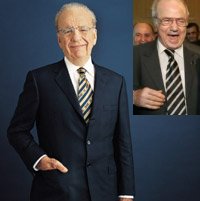 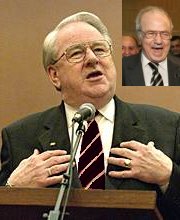 This clearly means something huge is underway. But what could it be?

So I did a little investigating and uncovered the following little known organizational updates from around the pro-Palestinian world: