On Sunday security forces loyal to Palestinian Authority President Mahmoud Abbas demonstrated the latest super-secret weapon they are deploying in their onging battle with Hamas militants to determine which faction has the right to embezzle generous European relief funds: 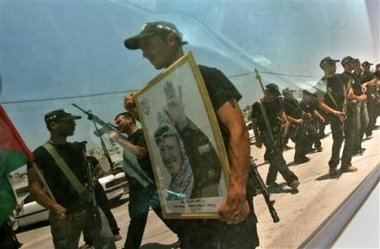 Palestinian security forces under the control of Palestinian President Mahmoud Abbas, one holding a portrait of the late Yasser Arafat, are seen reflected on a car window as they march in the West Bank city of Tulkarem Sunday May 28, 2006. Abbas plans to expand his private security forces, which until now was only responsible for protecting him, to 10,000 men, the Israeli daily Haaretz reported Sunday.(AP Photo/Nasser Ishtayeh)

Careful scientific studies have proven that the mere grizzled visage of late Terrorist-in-Chief Yasser Arafat has the power to kill at 45 meters and even intervening walls or armor scarcely blunt its nauseating power. The studies have been leveraged to create the latest Palestinian superweapon, the al-Arafat, a portable portrait which can be carried into skirmishes or placed at sensitive locations to establish zones of security. It is expected that Hamas militants will respond with modular barf-bag attachments for their scary masks and are expected to march on an empty stomach in upcoming shows of force.

In related media-watch news, several Reuters photographers were severely stricken and rushed to Israeli trauma wards choking on their own vomit after unsuccessful attempts to photograph the new al-Arafat weapon. Apparently only AP received the memo warning never to film the al-Arafat directly, rather only in reflection.