Disney's Quasimodo II: Hunchbacks Do It In The Belltower

Has Disney yet made a movie that couldn't be sequelled? It's as though every story ends with "and they lived happily everafter -- UNTIL..."

I was recently forced into a horrible decision. I was lying on the couch, perfectly comfortable, when my kids decided to watch Disney's "Hunchback of Notre Dame II," thus confronting me with the horrible choice: get myself off the couch, or allow their viewing habits to impinge on my peace of mind. As you can guess, I decided not to move, figuring I could always seek qualified psychological counseling later.

I can't really tell you much about what actually happens in the picture because I was too busy struggling intellectually with the question of why this film even needed to be made. After all, the first film pretty much covered the bases. Quasimodo, the Hunchback wanted a life of love and freedom outside the belltower and had a little crush on the gorgeous Esmerelda. 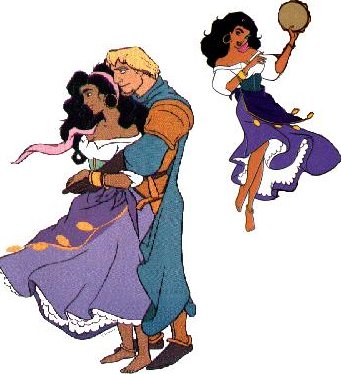 The original film tied this all together, ending with the moral lesson that a good heart is good enough; although if you're hideously ugly it still might not be enough to successfully compete for the heart of the prettiest girl. While Quasimodo didn't win Esmerelda's love as he dreamed, he did manage to get some little kids to play with him and smell some flowers, which is still pretty good.

But not good enough for Disney.

Having established the great value of a good heart, the company that has done more than even Hallmark to popularize squishy romantic love decided that Quasimodo had to have a girl too. But Disney executives are no fools. They are apparently aware of even their own internal contradictions. Quasimodo II had to overcome a fundamental problem before it could even dream of ringing up direct-to-video sales.

Their central character, Quasimodo, embodies the idea that looks aren't as important as your heart, and that good deeds are as important as a good girlfriend. But Disney represents the worldview that everyone should dream of romantic love with the most beautiful woman their corporate animators can imagine.

So having decided that they simply cannot leave the loveable hunchback stranded at the end of his own story without a love of his own, exactly what kind of girlfriend can they give this character?

I can only imagine the agonizing minutes that must have gone into making this decision.

Exec:
Ok, Quasimodo II, this is great. Now the girl. I want you to make her look like Esmerelda, only with a different color hairband or something, all right?
Director:
But isn't the Hunchback franchise all about inner beauty? I don't want to undercut our message: it's what's in your heart that counts, and the reward for a good heart is the love of another good heart.
Exec:
What the hell are you talking about? This is the company of Ariella, Sleeping Beauty and Cinderella. For sure, we don't want to sabotage our message, which is: it's what's in your heart that counts, and a good heart deserves a gorgeous girlfriend. This inner beauty crap is fine, as long as it's got great hair and a fine pair of ...
Director:
Look, man, I only signed up for this project if I'm free to pursue my artistic vision with complete integrity.
Exec:
You're not serious are you? Hey, there's nothing wrong with a little integrity, I can sell that. But you...you didn't mean you want the Hunchback to have a...a -- I can scarcely bring myself to say it -- an ugly girlfriend?
Director:
I think we should at least discuss it. I admit there could be problems. I'm not sure our artists even know how to draw an ugly woman unless she's a slimy arch-villain with tentacles and graying hair.
Exec:
You're right, they can't. So that's settled. Good, I can't tell you how relieved I am to hear that. It's very hard to market ugly girlfriend dolls and merchandise, so don't let me down now. We don't want to make ugly men think that their dreams are any less valid than those of everyone else. If their dream is to bag Demi Moore, they should cling to their dream for all it's worth and ring that bell.
Director:
Oh come on. Do we really want to give ugly people the idea that if they're just brave or good enough, they'll end up with a hottie before the end-credits? Look at yourself, you didn't end up with that arm-candy of yours based on the goodness of your heart -- I'm sure your wife would agree with me on that one.
Exec:
Ok, ok, I see your point. Look, let's compromise. So this girl's not a stunner, but she's no dog either. Make her "nice" looking. Very pretty for sure, but not quiiiite as pretty as Esmeralda. Give her blonde hair instead of Esmerelda's jet-black mane, and make it look a little limp, like she's got split-ends or something. And... oh, I don't know...say her breasts are maybe 10% less perky than Esmerelda's. You can tell them to work off the same body template and then just ease off the voom at the last second. Then, where Esmerelda wears sexy, off-the-shoulder numbers that tend to rustle seductively in the breeze and give us a little show, this girl can wear a frumpy dress made from used wash rags or something, very demure, but still promising, you know what I mean?
Director:
I can work with that. 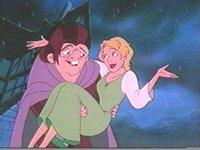 I'm pretty sure that the movie itself was not so great, but what do you care? My kids kind of liked it -- but they'd watch paint dry if Disney animated it. Your kids will probably like it too, or at least sit through it without bothering you for anything more than a refill on pretzels.

But if you're going to lie down for a little bit, pick a couch that's far away from the TV.