Simmering tensions between Hamas and Fatah have recently boiled over into open and occasionally bloody confrontation. While the media has published a few he-said he-seethed chronicles summarizing the spat, I was hoping to take a closer look at the dynamics of the ongoing Palestinian infighting. So I sent my crack AbbaGav research team (me) out to our top-secret information sources (AP, AFP and Reuters entries in Yahoo's news photo section) to piece together what is really going on.

Here is a more detailed look at the squabbling they don't want you to know about, since the Jews are only peripherally to blame. When the angry mobs of Fatah march on the indignant leadership of Hamas, things can get real ugly real quick: 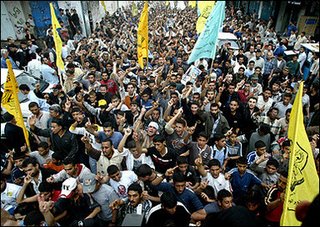 The Mob: O festering, swollen pustules of Hamas, we the men of Fatah will never stand by while you and your pretty-boy spokesworm besmirch our honor with your baseless intimations of Fatah collaboration with the Jews! We hereby challenge you to a duel! Sundown! Mobs at forty paces! 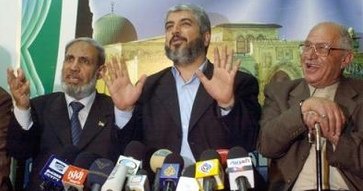 Al-Zahar (left): Wait a minute, YOUR honor?!! Why, how dare you impugn the good name of Hamas, and its exemplary record of terrorizing Zionists until every last one of them is off our land! How DARE you sir!! Why I'm of a mind to come down there and...
Meshaal (center): No, no, calm down my friend, they are just joking with us, surely. Eveyone knows we Palestinian militants are a humorous bunch. This is really quite funny actually.
Ancient Hamas Codger: Ho, Ho. I think it's funny too. I'm laughing so forcefully I fear I've hurt my schpilkus. Either that or my colostomy bag has sprung a leak. 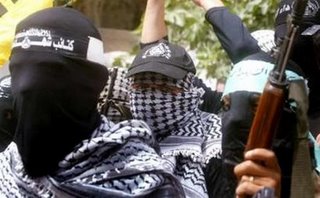 Fatah Kefiyeh (center): Ohhhh, so you think it's funny do you? Surely you understand we've got two or three Shaheeds primed and ready to go, just waiting for any Israeli defensive action to avenge. You do realize these walking bombs aren't exactly selected for their brain power, and how easy it might be to just accidentally drop one of them off at the wrong target? Say, oh, I don't know... your house?
Blindly Masked Fatah: Hey! Who is that I hear? Don't tell me it's that clown Khaled Meshaal! Oh do I want a piece of that guy. Which way is he? Somebody point me at him -- just guide my hand to my detonator switch and nudge me in the right direction. Actually, I think I can smell all that colgne from here, so I should be able to find him myself. 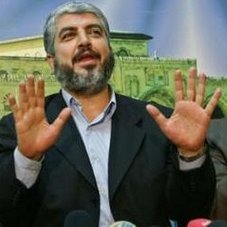 Meshaal: Easy there big fella. Heh. Go easy on me -- I'm a lover not a fighter. If you've got a bone to pick with us, let me give you the address of one of our trained Hamas combat cells, and you can go fight with them instead of with me. Besides, I'm too busy planning and financing Zionist deaths to waste time fighting with my impaired Arab brothers. And, by the way, THAT is exactly why your aging nincompoop, Abbas, should stand back and let US lead. Only WE have the courage to stand without flinching against any and all Israeli aggression, real or imagined.

Al-Zahar: Uh. (gulp) Those guns aren't, like, loaded are they? 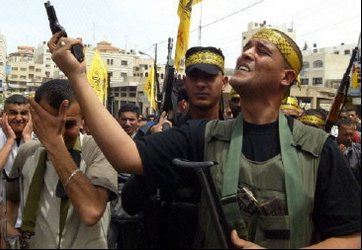 Fatah Activist: What's the matter little man?! You talk so tough to all the little cry-baby Israeli politicians, but you're not so tough when the men of Fatah get up in your face now are you? And yeah, this thing's loaded, I think! But I don't need bullets for the likes of you. You want I should come up there and pistol whip you across the forehead instead, like I'm doing to this guy right here?
Fatah Forehead: Owwwww, that hurts!!!
Capped Fatah Official: Why don't you just pop off a few rounds into the air? That always looks intimidating on camera. Make sure the photographer catches your seething side. 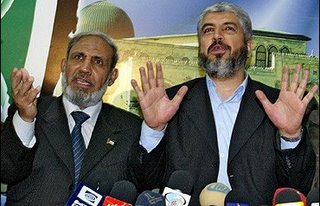 Al-Zahar: Do you see!!? Do you see, Khaled, he is pointing a gun at us!
Meshaal: Whoa, whoa, whoa, my friend. Now that's just rude. Simmer down pal. It's really not polite to point a gun at people like that. At least not at us. Have you no humanity? Why aren't you saving your ammunition for the Zionists?

The Mob: Don't lecture us, you pompous George Clooney wannabe! We've been out here doing the dirty work for years, killing Jews and blowing ourselves up, and all the while you fools just sit around running your kindergartens, hot lunch programs and ambulance service. Now you have the chutzpah to lecture US about saving ammunition for the Jews! 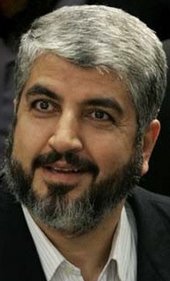 Meshaal: I can't believe you would say such a thing. Frankly, I'm hurt. Never did I intend to imply you haven't been killing Jews. No, I just think you've been going about it the WRONG WAY. Eery time one of your people blows up, there's scarcely time for the chunks to land before that bootlicker Abbas is on his knees at the nearest microphone, trying to balance on the old "sorry you're upset about the bombing" non-apology apology tightrope. Men of Fatah, get off of your knees! Stand and blow yourselves up with dignity and pride, under the relentless leadership of Hamas of course. 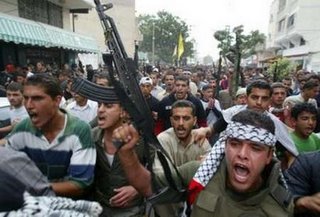 Seething Fatah Headband: How dare you question dear Abu Mazen's manhood! Just because you chuckleheads are too stupid to know how to blow yourselves up AND get paid at the same time, do not belittle your betters who have mastered this art. Prepare to die! 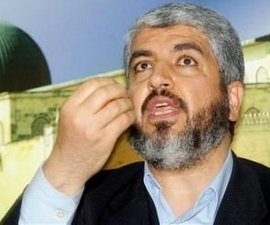 Meshaal: Look, I don't know if I can make this any simpler. Read my lips: Hamas leads, but Fatah follows, nobly killing and terrorizing all the way. I can't believe you have a problem with this. All right, so let's put it this way. We of Hamas will lead, but if you are so worried about the shriveling dignity of your old man Abbas, then you can say that he leads too. Ok? We just lead more. 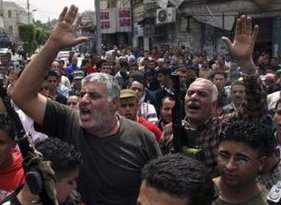 Big Fatah Goon: Feh! We were killing the Zionists just fine by ourselves, long before you'd even grown enough beard for the fleas to infest. Enough of your tricks! Unless you're telling us you will lead and we must follow while still pretending we lead, then you're in for a world of hurt fool. 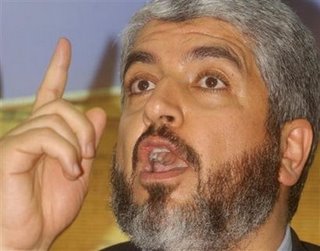 Meshaal: Please! I swear on Arafat's rotting, maggot-ridden corpse -- may Hanan Ashrawi and Madeleine Albright lead my harem of eternal virgins if I'm lying -- that is EXACTLY what I am saying. 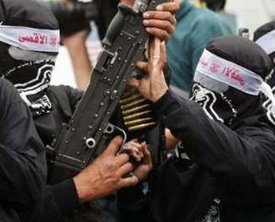