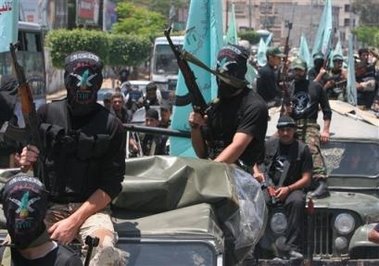 Palestinian gunmen from the Abu Rish Brigades, a group linked to Palestinian President Mahmoud Abbas' Fatah Movement, take part in a rally in Gaza City, Saturday, May 27, 2006. The gunmen were protesting against the deployment of a Hamas-backed force in the streets of Gaza which they claim is illegal and is a cause for factional fighting. (AP Photo/Hatem Moussa)

What AP fails to report is any indication of what I believe Abu Rish means in English -- The Green Leaf Brigades. Decked out in colorful attire, masks brightly festooned with their 5 pointed green emblems, the Green Leaf Brigades held the most festive and copacetic rally seen in the Strip in many years. The sweetly scented air was filled with chants and slogans as the Fatah-affiliated group promoted its agenda:
Attempts to question the group's leaders on the exact nature of their goals were unsuccesful, as no Green Leaf representatives showed up to the post-rally press conference.