It just warms my heart to see the Pakistanis having such fun and games... 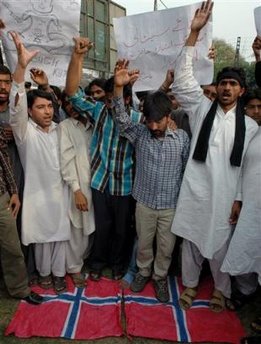 Pakistani protesters stand on the Danish flags and chant slogans during a rally to condemn the publication of cartoons depicting Islamic Prophet Muhammad, Saturday, Feb 25, 2006 in Lahore, Pakistan. Thousands of Islamists defied a ban on rallies across the country in condemning the Prophet Muhammad cartoons printed by some Western newspapers. (AP Photo/K M Chaudhry)

Oh. Still protesting the cartoons? This has been going on longer than a lot of Broadway shows. Which gives me an idea...

How could it not get financed? It'll be a smash hit, what with all the free publicity. Eh. With my luck, come opening night, they'd probably stop protesting, just to spite me.