Poodle and Prophet in Pink? I Think Not

Third World County has an image that is definitely NOT the Muslim Prophet in a pink dress: 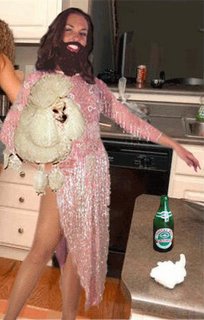 How do I know this is not a protestable, detestable image of said Prophet?

First of all, I'm utterly certain that the Prophet, good Muslim that he was, would never have allowed himself to be photographed drinking a Danish beer.

But I'm also pretty sure the Prophet never had legs like that. Plus, the Prophet never needed a lap-poodle. And I'm not aware of any literature suggesting any revered affinity for pink, or sequins for that matter.

Most importantly, it is a matter of the historical record that ballroom dancing did not exist as a competitive sport in the 7th century. It wasn't invented for another seven centuries, until an Islamic general documented the steps now commonly associated with ballroom dancing, but in an Islamic treatise on battlefield tactics and maneuvers. It was, I believe, the Jews who stole the idea and turned the whole thing into the foo-foo tux-and-sequins dance craze we know and revile today.

And there is yet one more reason I'm pretty sure it's not real -- there is scarcely any likeness at all: 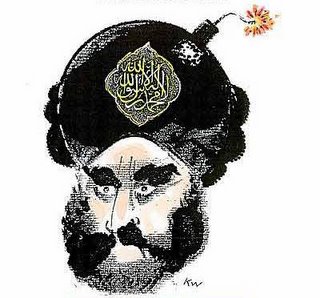 No fuse. No turban. The beard is just all wrong, not the way the Prophet's is imagined to be at all.

Seriously folks, let's get a grip now -- and by folks, I mean Rampagers of Peace who can't handle a carefully arranged sequence of pixels on the internet, and no, that is not all Muslims. This has gone on long enough. I, like most who have republished one or more of these images, do so not as a mockery of your Prophet, but as a statement of defiance. You demand, on threat of violence, that Western civilization submit its freedoms to 8th century censors. I refuse. Denmark has refused. I hope we will all refuse.

Once you understand that we refuse, maybe we can get busy solving the problem.

Time to grow up folks and either a) live peaceably in the world amongst others who are not like you, b) return to a life of isolation in your own private century, or c) live with the consequences of a Dark Ages army declaring war on the 21st century. You're on the clock.

Disclaimer (again): I'm sure many Moderate-Western-Muslims do not approve of the violence carried out by those who rampage in their name. But, moderate Muslims, you are on the clock too, just a different clock, and with a different choice. Great respect goes to those who stand up to their misguided kin, and show them a different path. That means, at the very least, counter-demonstrations that are peaceful and large. Speak up! Your freedom of speech has been bought and paid for. Use it.