Memo to all gunmen:

I'm sure you're all aware of this incident:

Visitors had already left the club, one of the few places that alcohol is served in conservative Muslim Gaza, when the gunmen tied up the security guard and set explosives that blew out windows and ripped up the roof.

There was no immediate claim of responsibility.

Ok, who's the idiot who decided to leave a tied-up witness? This is going to cost somebody a couple everlasting virgins. How am I supposed to create even the ambiguous impression that Israel was responsible for this... this... tragedy, when you imbeciles are leaving behind loose ends? You waited for all the infidel drinkers to leave, is it too much to ask that you wait those last few extra minutes for the security guard's nap, from which you could have wakened him with what just might have been the sound of Israeli helicopters? Now look how hard I have to work for so little result: 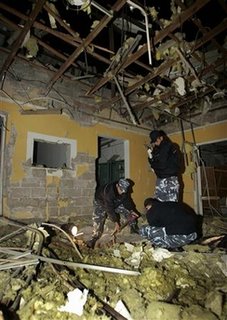 Palestinian policemen inspect the damaged drinking hall of a club for United Nations workers after it was blown up in Gaza early January 1, 2006. Masked Palestinian gunmen stormed into a club for United Nations workers in Gaza City early on Sunday and blew up the drinking hall, in a new sign of growing unrest in the chaotic territory. (Mohammed Salem/Reuters)

You guys have absolutely no idea how much it took for me just to get Mohammed to move any mention of your stupid masked faces down to the second sentence, where hopefully, a few of our international supporters won't bother reading about your part in this fiasco.

Next time, please let me simply release a simple statement and be done with it: "While we will always wage jihad against the infidel use of alcohol, nevertheless, we heartily condemn all Israeli acts of aggression against humanitarian UN forces."

Are we clear on this?