It would be a pity it the Hamas PR department let special moments like these pass without putting some thought into a signature soundtrack to really drive the message home. 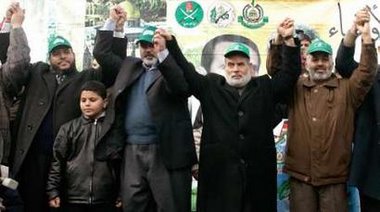 Since Mohammed Salem of Reuters didn't mention what music was playing in the background, I thought I'd take a shot at it myself. Of course, if the Hamas party planners pick one of my recommendations, I'll expect a shout-out.