Sticks and Stones and David and Goliath

Anyone remember what kind of weapon young David used to kill Goliath the Giant? 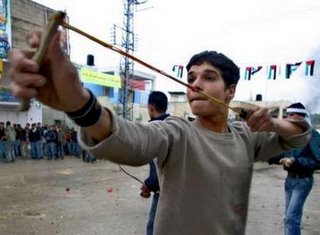 A Palestinian youth uses a sling shot to throw stones towards Israeli troops in the West Bank village of Alyamoun near Jenin on December 20, 2005. Palestinian gunmen briefly seized Bethlehem city hall, overlooking the Church of the Nativity, on Tuesday in a jarring interruption to Christmas preparations in the traditional birthplace of Jesus. REUTERS/Abed Omar Qusini

Yeah, that's the one.

Reuters wants us to view the Palestinians as virtuous slingshot snapping Davids while simultaneously innoculating us against the idea that anything these "youth" engage in can properly be considered "violence" worthy of response. That's why we are shown picture after picture of awkward Palestinian kids tossing rocks at armored personal carriers: to convince us that any response by Israeli soldiers is "disproportionate". What kind of grownup shoots at a little kid? Obviously a cruel oppressor who deserves to be put in his place, to be taken down a notch just like Goliath the Giant.

But don't forget, sticks and stones CAN break your bones, perhaps they'll even kill you. Especially when slung with a sling shot, even one wielded by just a little Palestinian youth. After all, David was but a youth with a slingshot when he killed Goliath.

When Israel fights back against potentially lethal slingshots, they are not overreacting. Forceful self-defense is perfectly legitimate against potentially lethal force -- ideally before its lethality is proven in reality, since it's hard to defend oneself when one is already dead. Is anyone happy when Palestinian rioters die or are injured, even those with slingshots? No. But the answer is to cease sending youth to assault IDF positions, not to demand that Israelis expose their foreheads, Goliath-style, as the rocks come streaking toward them.

Anyone who thinks the Israeli "Goliaths" have no right to defend themselves from the annoying little Palestinian pebble throwers should spend ten minutes standing in front of this peace-loving slingshot-wielding David and his friends. And remember, no disproportionate response allowed -- they're only sticks and stones. Just beg for negotiations instead.