GQ, via MSNBC, gives a first, voyeuristic peek at the empire-shaking photo Bin Laden doesn't want you to see: 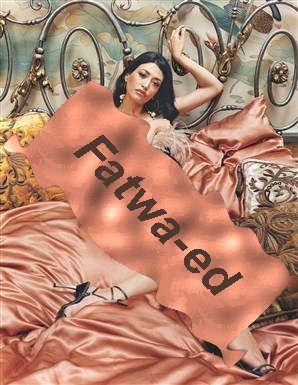 Osama bin Laden's niece, in an interview with GQ magazine in which she appears scantily clad, says she has nothing in common with the al-Qaida leader and simply wants acceptance by Americans.

I've been arguing, or at least joking in a serious way, that the key to bringing down Islamic radicalism and terrorism is through the emancipation of Islamic women. While this isn't exactly what I had in mind as a first step, it does kind of grab your attention. Of course, there's a lot of room for emancipation somewhere between the burqa and the bare-all, but we can work out the details later.

Asked if she would like to perform her music in the Middle East, Dufour says her mother, Carmen Dufour, would be too afraid that "someone would want to kill me."

"Listen, I would love to raise consciousness. Maybe women could hear the songs and realize that I'm doing my dream and hopefully they can, too," she said.

Yeslam and Osama are among 54 children of the late Saudi construction magnate Mohammed bin Laden and his 22 wives. The extended family includes several hundred people.

Binladin, who received Swiss citizenship in 2001, has condemned his half brother "for his acts and his convictions." He intentionally spells his name differently from his half brother.

In the interview, Dufour says she would not date a fundamentalist Muslim and that she cried hysterically when she witnessed the attacks on New York while staying with her mother in Geneva.

Good luck to her. It's a little sad that she felt the best way to plead for acceptance to an American audience was to pose with her clothes off, but it might actually work -- at least in the US. Of course, as a first step for the emancipation of Islamic women, this is likely to have nearly zero impact amongst the Women of Al Qaeda. In fact, it will probably be seen as further proof of the West's decadent effect on the faithful.

But it's a start. Learn more, click the image. I checked it out -- just for the article, of course. It's very well-written.
Technorati Tags: blog, bin laden, wafah dufour