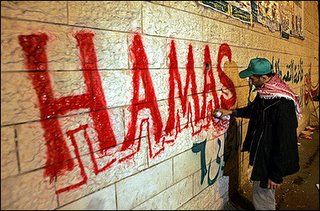 Palestinian supporters of Hamas write slogans for the election in Gaza city. Campaigning begins for the second Palestinian parliamentary election, with factions staging launch rallies despite major question marks hanging over whether the vote will take place.(AFP/Mahmud Hams)

I hesitate to lecture a French press agency on issues of cultural language purity, but if this were an "election slogan" then it would be written in Arabic, for the voters -- not in English. No, this is what is known as propaganda. When AFP photographs genuine election activity then it is reporting news. When it photographs events that are being staged only for its photographers and which have little if any relevance to the elections themselves, then, at least for this photo, AFP is acting as part of the propaganda arm of a terrorist organization.