Too riled up to understand a double negative

Hey, when you're totally amped up on raw religous rage and testosterone shots I know it can be hard to understand the logical concept of a double negative, but if you're going to frame a coherent message for the global press the way you were instructed, you have to at least try. However, in all the chaos and confusion, it's easy to forget, for example, that saying "it's not a bad idea" actually means that "it is a good idea." If your brain has turned off after a grueling day of flag burning, effigy immolation, and embassy destruction, sometimes it's best just to go home and get some rest and come back fresh on the morrow, before you do something stupid like this: 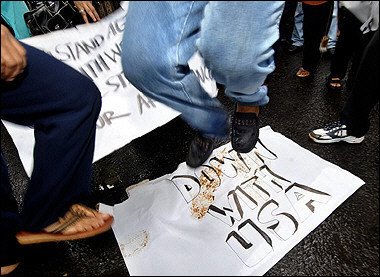 Protesters step on a anti-US placard during a demonstration in front of the Danish embassy in Jakarta. US President George W. Bush condemned the violent response to newspaper cartoons of the Prophet Mohammed, but warned that the media have 'the responsibility to be thoughtful.'(AFP/File/Jewel Samad)

I don't want to irk these gentlemen anymore than they already are, but I must point out that jumping up and down, stamping on a "Down With USA" sign, actually forms a logical double negative with the resulting media message: "Up With USA." Oh me oh my is the Imam going to be ticked off when he sees this one.