We interrupt coverage of AbbaGav's personal life to bring you this fast-breaking story from Yahoo News... 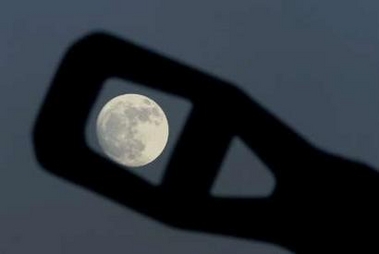 The moon is framed through the barrel of an Israeli 155mm mobile artillery piece in Nahal Oz at the border of Israel and Gaza strip July 9, 2006. Israel launched air strikes and artillery shelling against Palestinian targets across the Gaza Strip on Sunday and said it would continue an open-ended offensive after rebuffing a ceasefire proposed by Prime Minister Ismail Haniyeh of Hamas. REUTERS/Yannis Behrakis (ISRAEL)

Middle East experts were quick to point out the urgent importance of this special event, noting that according to astronomical calculations the moon is not expected to be framed by the barrel of an Israeli 155mm mobile artillery piece for at least another 5 days -- or even possibly up to a week if the artillery piece is moved.

Asked how they expected to handle the upcoming period with no shots of the moon framed by Israeli heavy weapons, journalists admitted to being in a bit of a quandary as to how they would be able to publicize Israeli air strikes and shelling, and their militaristic rebuff of Hamas Prime Minister Haniyeh's offer of terms of Israeli surrender. Journalists held out hope, however, that a burning Israeli or American flag surrounded by the faces of protesting Palestinian youths might be found to make up for the expected moon-framed-by-artillery shortfall.

We'll have more on this important story as it develops.