The "Death to the Pope for Calling Us Violent" Protests

The Pope's statement that there is no place for violence in religion and his corresponding pointing to Islam's ideology of Jihad has well and truly ticked off a few people, from New York Times editorialists to rank and file Palestinian terrorists. Many Islamist activists are so perturbed that they've taken to the streets to proclaim their seething anger at the Pope for questioning their pacifism. 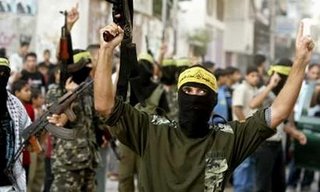 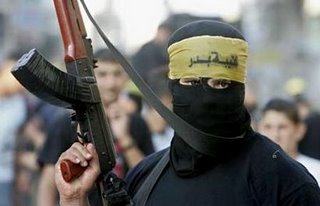 [Palestinians] from the al-Aqsa Martyrs Brigade attend a rally in Gaza to protest against remarks regarding Islam made by Pope Benedict XVI September 15, 2006. REUTERS/Mohammed Salem (GAZA)

Of course al-Aqsa Martyrs Brigade would abhor the Pope's intimations that there is any threat of violence behind the Jihadists' push for Islamic supremacy. Their greatest aspiration in life, obviously, is martyrdom. And, equally obviously, the Brigade's active members have not yet achieved that dream, and don't really want the Pope's preachy pontifications against "violence in religion" jeapordizing their chances at dying a violent death while nobly dragging a few infidels with them.

But it's not just the Martyrs Brigade exploding (figuratively) in spontaneous, peaceful-ish demonstrations of their anger at the Pope. Even the moderate Islamist organization Hamas -- they're moderates now, right? -- even they're violently peeved with the Pope about this. Peeved enough to shout peaceful, non-violent slogans proclaiming Islam's distaste for any violence perpetrated in its name -- or at least distaste for having such violence criticized: 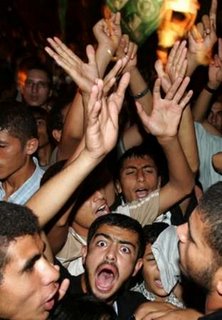 Can you feel the vibe? You can almost hear the chants, can't you?
Clearly, 60's-era peace activists should immediately charter an emergency planeload of tie-dyed shirts to support their peace-protesting brothers.

Islamic Jihad protests have apparently been delayed until leaders can reprint the usual banners, flags, and Death to the Jews™ headbands that don't feature the words "Islamic" and "Jihad" so close together.

At the risk of re-stating the obvious one too many times, please let me clarify: I am not anti-Islam; I'm anti-Jihad. The fact that so many AK-47 wielding masked Muslims object to the second position as if it is identical to the first is a big problem -- one I believe the Pope has properly identified, and for which he should be congratulated rather than called to apologize.

Wouldn't you think this would be one of those times when angry Muslim protest would be limited to the calm and reasoned appearance on television of every moderate, Western-dressed Muslim able to clearly explain that Jihad means internal struggle and that the masked militants are an extremist fringe that don't represent them?

Instead we are treated to one protest image after another showing a particular face of Islam that does little more than confirm the Pope's words. And the most moderate voices we hear are those shouting down the Pope rather than the men with the rifles and suicide belts.

If many in the West tire of waiting for moderate Muslims to wrest their religion away from those intent on stripping it down to little more than a violent death cult, and begin to doubt their desire to fight that internal Jihad for a peaceful version of Islam that can coexist with modernity, it wouldn't surprise me. It would sadden me, though.