Nobody Moves, or the Lebanese Civilian Gets It

The central pillar of Hizballah's military tactics is no great secret. You'd have to be blind not to see it -- or at least carefully averting your eyes from inconvenient truths. Alan Dershowitz, among the many who have discussed this, characterized Hizballah's secret weapon quite nicely:

It should be obvious by now that Hezbollah and Hamas actually want the Israeli military to kill as many Lebanese and Palestinian civilians as possible. That is why they store their rockets underneath the beds of civilians. That is why they launch their missiles from crowded civilian neighborhoods and hide among civilians. They are seeking to induce Israel to defend its civilians by going after them among their civilian "shields." They know that every civilian they induce Israel to kill hurts Israel in the media and the international and human rights communities. They regard these human shields as "Shahids," or martyrs, even if they did not volunteer for the lethal jobs. Under the law, criminals who use human shields are responsible for the deaths of their shields, even if the bullets that kill them come from policemen's guns. [...]

The world must come to recognize the cynical way in which terrorists exploit civilian casualties. They launch antipersonnel rockets designed to maximize enemy civilian deaths, then they cry ``human rights" when their own civilians -- behind whom they are hiding -- are killed by the democracies while trying to prevent further terrorism

Yael at Step-by-Step has put together a few examples of the tactical brilliance of Hizballah's military planners, and how they are holding off Israel's superior military might by holding Lebanese civilians hostage at point of gun or rocket, and yes, even murdering their own people.

Are these techniques working? Are they impeding the ability of the IDF to find and destroy Hizballah's missiles and the forces that launch them before they can be fired into Israel's cities? Of course they're working:

Despite the enemy's tactics, [Israeli Defense Minister, Amir Peretz] told Rice, the IDF was still operating as a moral and ethical army. Hizbullah, he told her, fired at Israel from within mosques and homes, using civilians as shields. "We called up one home and told the residents that we were going to attack, and that they needed to evacuate," Peretz told Rice. "They fled the home and only then did we level the building. A home whose occupants didn't answer the phone, he added, was not targeted.

Even the Professor who wrote the IDF's code of ethics seems somewhat stymied by the tactic:

Kasher admitted that the decision to bomb a house or town was quite complicated, especially if there are citizens who wanted to leave but were prohibited from doing so by Hizbullah.

"We should take into consideration that people want to leave and aren't allowed to leave, and that changes the situation, but not on a grand scale," he said. "There you can justify certain infantry attacks... but only if it doesn't dramatically increase the jeopardy of our troops.

Which doesn't really sound much different than the current solution of dialing up houses the phone and attacking only those where someone answers the phone and agree to release any civilians being held inside. In the meantime, while IDF forces are busy calling house to house, Hizballah fighters are tossing grenades and firing rockets from the windows of those same houses. Will this eventually cause the IDF to stop imperiling its own soldiers lives in this risky effort to reduce the risk to Lebanese civilians? How long will the IDF let its soldiers pay with their lives protecting civilians endangered by the very same Hizballah forces those civilians have accomodated and supported for years -- as at Bint Jbail? Will the IDF simply bomb villages that are Hizballah strongholds instead? It hasn't yet.

Despite what Israel bashers would have you believe, Israel is not intentionally slaughtering civilians. Even a shred of common sense is enough to recognize the obvious. If Israel wanted Lebanese civilians dead, would they have sent ground troops into Bint Jbail, suffering casualties Nasrallah is still crowing about? No, an army intentionally looking to inflict civilian casualties would have simply flattened the entire village. If these "civilian killer" aspersions on the character of Israel and the IDF were true, the death toll in Lebanon after more than 2 weeks of fighting would not be only 300. For simple proof, look at how many of their own Arab citizens other Arab governments have been able to kill, often in much less than two weeks. Syria killed thousands at Hama. Saddam is estimated to have killed hundreds of thousands of his own people. And they weren't firing rockets into his cities. Israel is showing amazing restraint, perhaps reckless self-endangering restraint. And Nasrallah is banking on it.

Hizballah's tactic of holding it's own people hostage as human shields is indeed working to an extent I haven't witnessed in years. It makes me think Nasrallah must have Mel Brooks, the master of this technique, on staff as a military consultant. 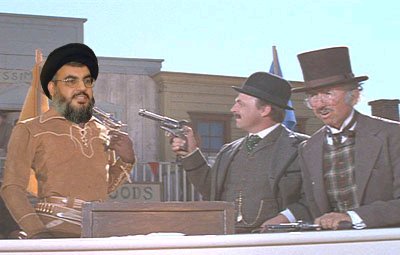 It worked for Cleavon Little in Mel Brooks' classic, Blazing Saddles. Sheik Nasrallah has clearly read, or rather watched Mel Brooks' version of "The Art of War" and thinks it will work again. Frankly, Kofi and the international community are reacting pretty much the same as the concerned lady in Brooks film, crying out: "Isn't anyone going to help that poor man?" (video link) The way they blame Israel for the deaths of civilians instead of Nasrallah, the one who intentionally imperils his own civilians and ours too, I'd have to say they might be proving Nasrallah right.

After the death of 50 to 60 civilians in a destroyed building in Qana, there are many who suddenly believe this must all stop. Of course, many of them felt it must all stop yesterday as well, and will continue to say so tomorrow regardless of what happens. I will say it clearly: I regret the loss of innocent Lebanese life.

However, Hizballah celebrates the loss of Lebanese life as a victory in its effort to enlist the world in its effort to stop Israel from defending itself. It has worked hard to create the precise circumstances which will maximize civilian casualties on both sides, since civilian casualties are known to affect modern democracies. In case anyone doubts Hizballah's intentional endangerment of its own people, despite the countless reports already published on the subject, I can only say "seeing is believing." Take a look at these infuriating pictures smuggled out of Lebanon and published exclusively at Australia's Herald Sun, showing just how much Hizballah cares about the lives of Lebanese civilians.

I will pray for Lebanese civilians, that they will soon know peace and prosperity. However, their suffering is caused not by Israel, but Hizballah. Their salvation will not come from condemnation of Israel. It will come from the utter destruction of Hizballah, and corresponding global condemnation of its pervasive and perverse use of human shields, so that this tactic is so thoroughly discredited it will never be tried again. Until then, Lebanese will continue to be little more than pawns who have only been granted a few days of quiet with which to unload more truckloads of Iranian missiles -- at least, until the next time Nasrallah requires civilians to camoflauge his attacks.

Captain's Quarters has a clear explanation of the meaning of the Herald Sun's photographs.

Rhymes with Right sympathizes with the suffering of innocents while still maintaining the perspective needed to condemn the Hizballah forces who put them in danger.

Elder of Ziyon has some great information on how ridiculous the international legal structures are with respect to human shields, and that Israel is still doing everything it can to respect these conventions despite Hizballah's blatant, intentional and nearly universally ignored violations.

Soccer Dad reminds us that the world has actually recognized the difference between the regretable but practically unavoidable problems of a justified air campaign, and intentional attacks aimed at harming civilians. Now getting anyone to recognize that difference when Israel is involved could be another story.