I thought only terrorist-trainees jumped through flaming hoops 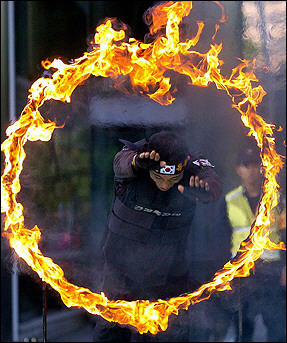 Jumping through hoops : A South Korean SWAT team member jumps through a burning hoop during an anti-terrorism exercise in Seoul. (AFP/Jung Yeon-Je)

This really surprised me, to see the anti-terrorist forces adopting the training techniques of their opposition: A Palestinian boy jumps through a ring of fire in front of U.S. and Israeli flags during an Islamic Jihad movement anti-Israel rally, in Gaza, April 15,2005. Thousands of Palestinians attended the Islamic Jihad rally in Gaza. REUTERS/Suhaib Salem

Hey, what do I know? I guess Korean anti-terrorists fight fire with fire. I just hope no brave security forces are ever hurt out in the field bumping heads with terrorists trying to jump through the same flaming hoop from the opposite direction.

By the way, the Korean guy wins on points and degree-of-difficulty. The bad guys don't stand a chance.