What? No Israeli Flags? 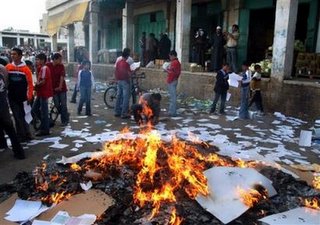 Palestinians look on as election result lists for the Fatah Party primary burn in the street after protesters stormed the election headquarters in the village of Halhul, outside the West Bank city of Hebron, Saturday Dec. 3, 2005. The protesters burned the lists after results showed Jibril Rajoub, a gruff security chief known for his pragmatic dealings with Israel was the top vote getter in primaries of the ruling Fatah Party in Hebron, according to preliminary results released Saturday, capping a rocky week of voting throughout the West Bank and Gaza Strip. (AP Photo/Nasser Shiyoukhi)

A step forward for Palestinian democracy? It's oddly refreshing from the Israeli perspective to see Palestinian protesters just burning election lists instead of flags or people. A bit ironic perhaps, but remember: baby steps. Baby steps.