Mastered the Images, Not the Substance

As Palestinians carry memories and images from recent Iraqi elections with them to the polls, they are as aware as we are that certain new democratic forms must be observed. It is no longer enough just to stand a helpless grandma in the center of the ring while Yasser Arafat pummels her senseless and then declares unanimous victory. A modern Arab democratic-style election requires more in the way of amenities: nattily dressed candidates, political rallies, election-day activism, and of course exultant purple fingers.

Well the Palestinians certainly have their candidates decked out in spiffy suits, photographed casting ballots with cultured pinkies raised higher than any authoritarian strong man would ever allow: 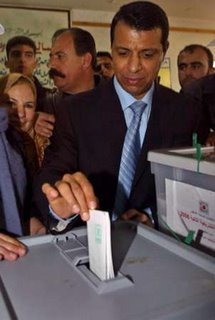 Senior Hamas leader Mohammed Dahlan casts his ballots inside a polling station in the Khan Younis refugee camp south of Gaza Strip January 25, 2006. Palestinians voted in their first parliamentary elections in a decade on Wednesday, a ballot that could bring the militant Islamic Hamas movement into government for the first time. REUTERS/Ibraheem Abu Mustafa

They've got the political rallies too, building grassroots support for the candidates, and also killing any stray pigeons dumb enough to fly overhead: Palestinian militants from the al-Aqsa Martyrs Brigades hold up their weapons during a rally in support of the Fatah movement's parliamentary candidates in the West Bank city of Jenin January 19, 2006. A Palestinian suicide bomber wounded 30 people in Tel Aviv on Thursday, raising tensions six days before a Palestinian election and confronting Israeli interim Prime Minister Ehud Olmert with a major test. REUTERS/Mustafa Abu Dayeh

It's also a great sign when a society cares enough about Democracy to mount a serious election-day "Get Out The Vote (or else)" effort: Palestinian gunmen attend the funeral of Fatah activist Yousef Hasouneh in the West Bank city of Nablus January 25, 2006. Hasouneh was shot dead on Tuesday by gunmen when he tried to prevent them from removing campaign posters. [...] REUTERS/Abed Omar Qusini

Oops, my bad. Wrong category entirely. While getting out the vote is important, this is the traditional Democratic "Parade of Party Gunmen" at pre-election funerals for murdered campaign workers -- many Westerners may not be so familiar with this ritual yet, but it grows on you. Sorry, don't know how I missed that one.

And of course, finally, the obligatory purple fingers. I'm not sure it's legal to hold an election without purple fingers anymore: 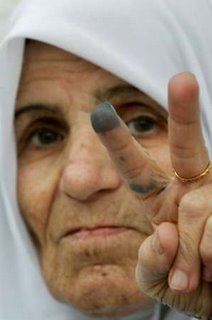 A Palestinian woman flashes a victory sign after she voted at a polling station in Gaza City January 25, 2006. [...] REUTERS/Mohammed Salem

Perhaps I'm unfairly analyzing the wrong purple-finger picture here. While this woman does exhibit a certain grim glee, she just seems to lack a certain excitement. I'm not picking up her sense of joy from the exercise of the right to choose her own path in life rather than merely select one of two competing plans to use the voters as cannon fodder. Let's check another picture, just to be fair: Whoops, that's an Iraqi. She does seem happy though, doesn't she? How about this one instead: Where's the joy? Oh, maybe this is just another bad example. Perhaps the photographer accidentally snapped this voter's picture at the precise moment he realized his colostomy bag needed changing. Who knows?

Obviously, I'm just a non-Palestinian blogger with no awareness of what's really going on there. I suppose I should hope that, contrary to the photos I'm seeing, most Palestinian voters really are overjoyed with the opportunity to choose between holy war waged in the name of Allah, and the same war waged in the name of Arafat. Perhaps if Palestinian voters really do share that sense of exhiliration the Iraqis displayed when they finally had a chance to vote for a post-Saddam way of life, then there is a chance they will truly measure what they get over the next few years, and perhaps in the "next election" -- we can only hope -- they will choose a life. And of course I do hope my cynicism is entirely misplaced and a Fatah-Hamas coalition government, giddy on the fumes of democracy, will shortly usher in an era of regional peace. Yup.

In the meantime, if you want to get a better idea of what's really going on at the Palestinian polls, check out Patrick Belton at Oxblog who is on the scene.