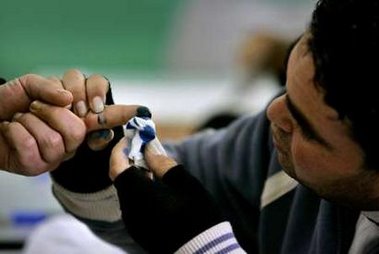 A Palestinian security officer gets his finger inked before casting his ballot at a polling station in the West Bank city of Ramallah January 21, 2006. Palestinian security forces cast the first ballots on Saturday in the Palestinian Legislative Council election, voting early before the main national poll next week, the first contested by the militant group Hamas. REUTERS/Stoyan Nenov

This suggests to me a way that Fatah could still take the election. They've had the presumably pro-Fatah PA security forces voting already, and their fingers have been inked. The inking of the fingers is so they can't vote again. Now if Sulayman-security-guy returns to the poll later with a purple finger -- I don't care which dead guy's ID he's flashing -- he's not voting.

So what can Fatah do to get back the momentum? In a word: ink bombs.

Simplest thing is a pot of ink with explosives, maybe a couple, planted surreptitiously around upcoming Hamas pre-election rally sites. Dial the cell phone number to trigger the charge and the ink goes splat all over would-be Hamas voters, including those valuable finger tips. If the strategy worked well enough, I suspect Hamas would be left with only one possible counter-strategy: hordes of fingerless Hamas voters showing up at the polls bearing doctor's notes explaining about the work accidents. Folks, this could get ugly.

Of course Hamas security may check this out and it might be necessary to send in suicide-ink-bombers instead, if Fatah has any left out in the bullpen.

Sure it would be a lot easier for them to go the old "rig the ballot boxes, dupe Jimmy Carter's crew and retroactively call off the election in the event they should lose" route, but that's just so cliched.