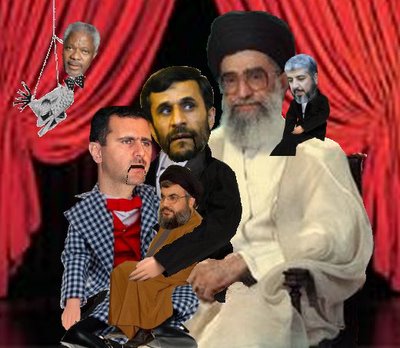 Ayatollah Khamenei, Supreme Spiritual Leader of the Iranian Islamic Republic, noted Vaudeville historian and one hell of a ventriloquist, enthralls the faithful with another of his impromptu performances. His amazing puppet shows never fail to delight audiences as he appears to control four puppets, often giving simultaneous voice to them all by speaking out of both sides of his mouth and other orifices too.

Let's listen in on Khamenei's latest, a piece he calls "How Meshaal Got His Glow Back", shall we?

Ahmadinejad: [whistling happily] What a beautiful day! Things are really going so well now. My Uranium is almost ready, Islamic freedom fighters are in power just about everywhere, and Pittsburgh is in the Super Bowl. Maybe this is the day of prophecy when I am to announce to the world that I, Ahmadinejad, am the Magic Mahdi. [He wacks the wooden head of the tackily jacketed puppet in his lap.] Hey! Optometrist boy! Is my head glowing? Do you see sort of an...an aura around me today?

Ahmadinejad: [as Khomenei slowly sips an entire glass of Kool-Aid] Hmmm. I'd better do something about this. I can't declare the prophecied end-of-the-world-as-we-know-it without my aura. [prop lightbulb flashes over his head as audience chuckles] I got it! I need another one of those UN meetings where I can make everyone not blink and my head glows while I talk. Hey! Myopia man! I don't care what it takes, but stir up some trouble. I want strife and conflict around here. Maybe do another one of those "whack jobs" of yours, hee hee.

Assad: Uh, Ok, no problem boss. [Brow furrows with a quick clacking sound, then returns to normal as the audience laughs. Shakes the turbaned puppet in his lap a few times.] Hey, Nasrallah, wake up!

Nasrallah: [grumbling] Do not DARE to bother my deep, deep meditation, you potato chip off the old block!

Assad: I'm sorry Mr. Nasrallah, but Boss said he wants trouble, if it's no trouble.

Nasrallah: Grrr. Oh, all right. But this is the last time! [then to himself in an undertone] I gotta get this idiot off my back -- better feed more information to those dimwit UN investigators. [to Assad again] Hmmm. I know! My missiles! Oh boy, I'll use my missiles! I've been sooo patient. Ask the boss for me if it's ok. Ask him. NOW.

Ahmadinejad: [strokes his stubble as Khomenei begins snoring in the background, head lolling to the side] I would have to say, uh -- what would the Mahdi do? -- hmmm... No. Tell him no. Tell him I want speeches that get the UN focusing back on Israel's human rights violations or whatever -- the specifics don't matter, just make it loud. That ought to get me at least a Special Assembly meeting.

Assad: Boss says no. He wants speeches and complaints, rile everybody up.

Nasrallah: No problem. I'll get my Hamas flunky to take care of it. He can do the old "anti-democratic, apartheid Israel is ruining our free elections" routine. I love that one. [looks around] Hey! Where's my lackey! Lacky boy! Where'd you get off to? Don't tell me you let the Mossad poison you again?!

Nasrallah: Watch who you're calling dummy, dummy! Hey, how come you get to sit up there? I wanted to sit there! I'm the Master of Murder who chased the ZDF out of a country! Do not forget who taught you how the word Hizbulization, boy!

Ahmadinejad: [following the conversation, noticing Meshaal too now] Hey! I wanted to be up there too! No fair, I'm the Mahdi, after all!

Meshaal: Give it a rest will you! I have the honor because I am the special one. How many of YOU have gone out and won an election, all the while thumbing your nose at the entire world with your open intent to destroy a UN member state? Hmmm?

A lot of hands go up. Khamenei, still snoring, miraculously holds up a free hand to Meshaal's face.

Meshaal: [kisses the hand with a wooden smirk to the other dummies] NOW, Ahmadajihadiboy, or whatever your name is...

Ahmadinejad: That's Ah-Madi-Nejad. With a MAHDI in the middle? Got it?

Meshaal: Whatever. Listen to me. I want trouble on the Zionist entity's northern border, and I want it NOW. If I'm going to make speeches, I want the proper backdrop, got that? Now move, puppet boy! Get Nasrallah on it!

Ahmadenijad: I swear on the grave of the great Shelly Winters, when I declare the end of days -- AND I WILL -- I'm going to end your days first, little man. In the meantime, can't I just nuke the Jews instead? Why all the fuss?

Loud sirens, a bird drops from the ceiling.

Kofi: You said the magic word. The word is Nukes. Please don't say it again. Say negotiate instead, at least for today.

The bird zooms back up to the ceiling.

Meshaal: [head starting to glow oddly] You heard the bird brain, now get moving on my mayhem, then negotiate in the afternoon. I'll handle the rest. The Zionist entity is MINE! Now, who's your Mahdi?!! [head tilts back as he begins laughing maniacally].

Curtains slowly close to raucaus applause as Khomenei laughs four simultaneous, individual, sinister laughs, all the while continuing to snore himself.