I ran across a few new Yahoo News Photos showing Palestinian military training exercises and decided to do a photo analysis, in case it was possible to glean any useful intelligence from them. Let's take a look: 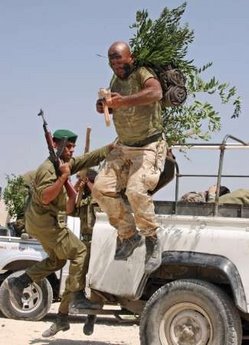 Okay, something isn't right in this photo. My blogging-senses are tingling. Hmm, no, nothing photoshopped into the sky. What could it be?

Ah, I see it. We're supposed to believe we're being made privy to a Palestinian camoflauge drill. Ha! Fat chance. If you are going to camoflauge yourself in the middle of a sandy, scrubby desert, would you stuff a bunch of green leafy twigs in your shirt? No, that would be stupid -- especially if you're jumping out of a truck! A soldier jumping out of a truck should be camoflauged to look like a truck -- you know, with maybe a steering well around his head and a greasy crankshaft glued to his uniform.

No, there is clearly something else going on here.

I believe we are witness to the inaugural Palestinian Paratrooper Practice. Of course they can't jump out of an actual airplane, but jumping out of a truck is pretty scary too. And they certainly don't need real parachutes if they're only jumping out of the back of a truck just for practice. I'm sure they were told they'd be issued functional parachutes should they ever have to jump out of a real airplane. Probably. Assuming they aren't just being used as cutting-edge Shahid-class ballistic missiles, also known as gravity bombs. 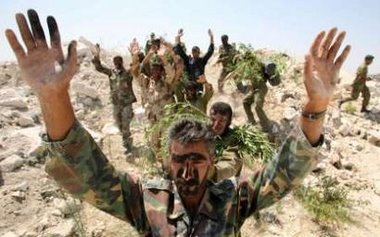 I'm curious whether the guys in the background -- the ones that look like they're wearing berets -- are possibly advisors from a foreign country come to explain how to surrender properly.