I guess the old "We're in a zoo!" cliche from the Twilight Zone isn't going to be quite as funny anymore. Then again, the reality that Rod Serling only dreamed of might be ten times more hilarious anyway. 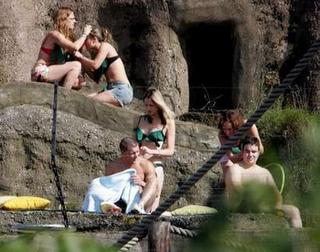 Volunteers interact inside the Bear Mountain enclosure as they take part in the Human Zoo exhibit at London Zoo, August 25, 2005. London Zoo have set up the exhibit to communicate the importance of man's place in the planet's ecosystem. The volunteers will be on display from August 26 to August 29, 2005. REUTERS/Stephen Hird

Apparently, man's importance to the ecosystem consists primarily in the wanton destruction of innocent communities of head lice. Bad humans!

UPDATE: For the inside story of the Human Zoo, check out Spinning Girl's blog. Hopefully she'll make a full recovery.