Me and You and a Boy Named Insurance 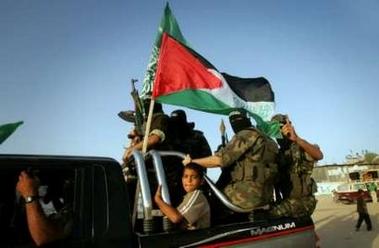 Masked Palestinian militants from the military wing of the Hamas movement participate in celebrations of the Israeli pullout from Gaza at the Rafah refugee camp in southern Gaza Strip August 24, 2005. Israeli military forces expect to be out of Gaza in mid-September, completing a withdrawal from the territory after 38 years of occupation, Defence Minister Shaul Mofaz said on Wednesday. REUTERS/Suhaib Salem

Reuters omits mention of the most important member of this terrorist entourage: the boy hanging out the window. The one the terrorists playfully call, "Insurance."