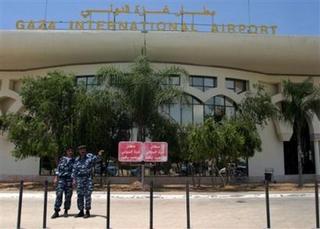 Palestinian policemen stand outside the Gaza international airport, renamed Yasser Arafat international airport, in Rafah in the southern Gaza strip, Sunday, August 21, 2005. With Gaza International Airport as a backdrop, Palestinian leader Mahmoud Abbas promised his fenced-in people freedom of movement once Israel pulls out of the Gaza Strip. But just a few days after that solemn pledge, the airport's runway torn up by Israeli troops in 2001 fighting stands empty and it may take a long time before planes take to the skies from here. (AP Photo/Khalil Hamra)

Attention. The White Zone is for loading and unloading of weapons only. Actually, the red zone is for loading and unloading weapons too. The entire terminal is a non-smoking zone, except for certain designated fuse-free areas. Unattended explosives will be confiscated for other uses. Departing passengers, please have your boarding pass and PA security ID out and be prepared to lift your face mask briefly at the checkpoint. The use of cell phones is strictly forbidden within a hunderd meter radius of the short-term parking lot. Remember to check your baggage claim tickets before departing the terminal as so many rocket propelled grenade launchers look alike.