If you remember the bombing in Sinai last October, you'll remember who most likely did it:

Several Egyptian security experts and political analysts said that the Mossad, Israel's spy agency, was behind Saturday's attacks on the Red Sea resort of Sharm al-Sheikh.

Similar accusations were made against Israel in the past, particularly after last year's attack at the Taba Hotel in October and after the 9/11 attacks in the United States.

AP photos of some of the suspects now on trial makes me think there will have to be some rewrites to the original copy: 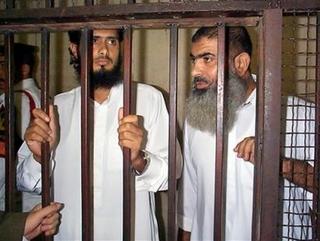 Egyptian's Mohammed Abdullah, right, and Mohammed Gaber Sabbah, left, two suspects in last October's terror bombing attacks in and around the Red Sea resort town of Taba, look on behind bars in the courtroom's caged dock during their trial at an Ismailiya court, northeast of Cairo, Monday, Aug. 29, 2005. Taba a popular spot with Israeli holidaymakers, on the Israeli-Egyptian border, was where thirty-four people including 12 Israelis were killed in an October 2004 attack. (AP Photo)

Maybe we'll see some clarification about those "similar accusations." Probably not. The accusations were made. It's a fact; what's to correct? Especially since it's only a matter of time until they catch these guys' Zionist handlers.