Hamas Remix: You Gotta Fight For Your Right...to Party! 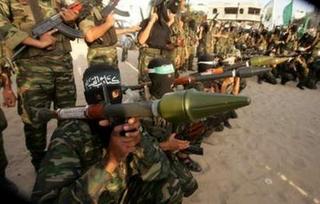 Masked Palestinian militants from the military wing of the Hamas movement participate in celebrations of the Israeli pullout from Gaza at the Rafah refugee camp in southern Gaza Strip August 24, 2005. [by the way, if they're wearing masks, how do the reporters know they're from the military wing?] Israeli military forces expect to be out of Gaza in mid-September, completing a withdrawal from the territory after 38 years of occupation, Defence Minister Shaul Mofaz said on Wednesday. REUTERS/Suhaib Salem

Holy crap, these people know how to have a good time! And if you dial their toll free party hot line, they're available for your child's birthday or Bar Mitzvah celebration. You supply the people, let Hamas do the rest.