They Only Trust Them With Wooden Guns

Hamas is really going out of its way to show the world how scary even its women are. They want us to know these babes are ready to pick up the gun and fight off the enemy. Ok, just one thing... 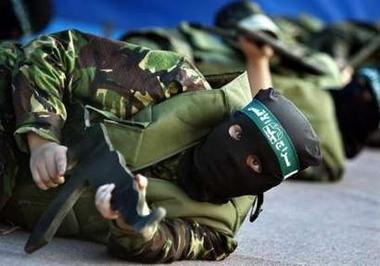 Palestinian women wearing Hamas banners around their forehead show their skills during a gathering of the Islamic women society to celebrate the Israeli pullout from Gaza Strip in Gaza City September 1, 2005. Israel held its first public talks with Pakistan on Thursday and Jordan's king was expected to visit the Jewish state soon in signs of a thaw with the Muslim world after its evacuation of Jewish settlers from Gaza. REUTERS/Damir Sagolj

Did you notice how in these pictures they only give the women wooden guns? Funny how that works out. Men: explosives, rocket launchers and machine guns. Women: toy wooden guns and a burka.

Maybe we should be giving the Palestinians weapons after all. One gun for every woman. It might be interesting to see what they do with them.

Yeah, I know, I've seen the surveys that the women are more radical than the men. That's why it is so important we make the case that this conflict is about honor killings, female genital mutilation, polygamy and the right of women to drive or travel unescorted. I can't wait for the day when Arab women show us all what the term radical feminist really means.