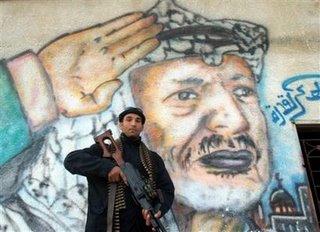 Guarding the mural? Why on Earth would they have to guard the mural of their beloved "martyred" leader? This made absolutely no sense to me until I did a little research, and discovered a translation of the "mural patrol's" rules of engagement, identifying the various threats they are to be on guard against:

O, great guardians of the painted tiger, keep your thoughts on the virgins of heaven, but your backside to the martyr's face. Safeguard the memory of his most revered and whiskered carcass against all infidel forces:
Best of luck and may you be blessed by the Most Merciful etc. and etc.