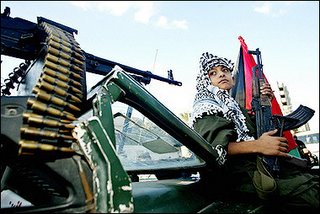 A Palestinian boy is dressed as the late leader Yasser Arafat as he attends a rally markingbegins counting virgins as he realizes the loaded, high-power machine gun is aimed right at him, in honor of the first anniversary of their late leader's death in Khan Yunes the Gaza City.(AFP/Said Khatib)