They Never Tell Us These "Slogans" 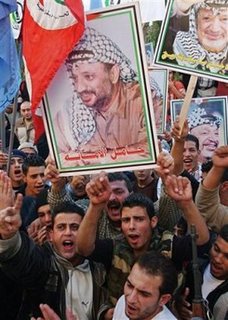 Palestinian supporters of the Fatah faction shout slogans while holding up pictures of the late Palestinian leader Yasser Arafat during a rally to mark the first anniversary of Arafat's death at the Ein-el-Hilweh Palestinian refugee camp, near the southern city of Sidon, Lebanon, Sunday, Nov. 13, 2005. Arafat died in a French hospital on Nov. 11, 2004, after a two-weekthe last two weeks of his illness. (AP Photo/Mohammed Zaatari)

Did you notice they never tell us anything about these slogans that are always shouted at these Palestinian peace marches? Well fortunately, I have a very rare ability: I can read lips... in Arabic... from still photos. So I can state unequivocally that the slogans they are shouting are: