It looks like that whole Gomer Pyle-esqe "Left Right Left" thing isn't such a big deal to the professionally trained Palestinian security forces: 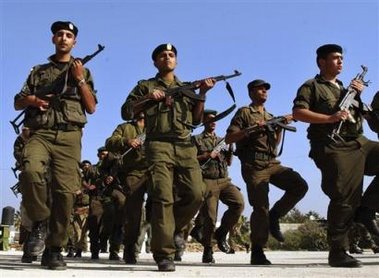 Palestinian policemen march during a routine training session at a police compound in the West Bank town of Jenin Tuesday Dec. 6, 2005. Israeli officials, seeking to put pressure on the Palestinians to crack down on militants, pledged Tuesday painful retaliation for Monday's suicide bombing by the Islamic Jihad group in the coastal city of Netanya that killed five Israelis outside a shopping mall. (AP Photo/Mohammed Ballas)

If you look closely, you'll see there are knees flying all over the place in this picture. Some are on left and some are on right. Some are caught mid-shuffle while others could knee Yao Ming in the crotch. That's not even to mention the guy in the front row who is carrying his weapon angled to blow his marching neighbor's head off.

I hope they're a lot better at fighting terrorism than they are at marching, but somehow, I doubt it.