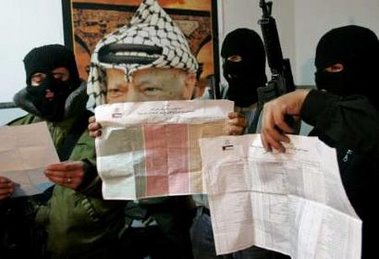 Palestinian militants from the al-Aqsa Martyrs Brigades hold election result lists of the Fatah party primaries during a news conference called to reject the result in the West Bank city of Hebron December 3, 2005. In the southern West Bank village of Halhoul, Fatah gunmen claiming election fraud stormed a polling station on Saturday and wrecked the vote, firing into the air and destroying ballot papers and ballot boxes and calling for a repeat of the vote. REUTERS/Nayef Hashlamoun