Do you remember when I said I was trying to shake the habit of commenting on newswire photos? I was just kidding. 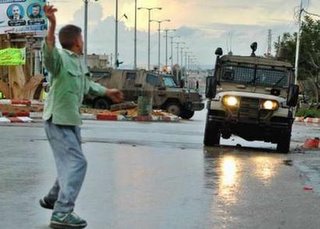 Ok, if this is a boy, then can we please at least be fair from now on and refer to Ariel Sharon as a "young man"? Look, if the United Nations is your moral authority, then I assume you can use their definition of youth, although even then it might be cutting it close to call this guy a boy -- his kids, maybe.

But that is just picking nits, isn't it? I know it is. But there is a reason people pick nits: if you just ignore the nits, they turn into a bigger problem. So I will probably continue picking them, fully aware they are only nits, but also aware of what they will become if no one picks them.

By the way, it would be fair to ask how the caption might otherwise have been written. It's so easy to criticize when you're not the one who actually has to stick your neck out. So I'll take a shot at it. Feel free to criticize:

Israeli soldiers do absolutely nothing as a young Palestinian man stones their jeep from an exposed position at close range. Elsewhere, a Palestinian bomber blew himself up in an unsuccessful attempt to kill as many Israelis as possible and Israeli forces killed two Palestinians who were armed with guns, not rocks.

I would want to be careful not to leave you with the impression that because the photo shows a Palestinian "boy" throwing stones, that the "clashes" in which the two other Palestinians were killed were similar, "harmless", boys-will-be-boys-until-Israelis-shoot-them stone throwing incidents gone awry. Reuters stringers are not so careful about these impressions, and you have to wonder why Reuters continues to be so careless about these stringers.