Whatever I might think of Israeli drivers, at least we're not counting on Hamas to be the ones to fix the problems. Should Hamas end up in office, one of their most pressing concerns will be the blatant disregard for traffic safety. It's clear from the newswire photos that following the rules of the road is simply not an issue in today's Fatahville.

In what is obviously a Mossad plot to inflict cranial incapacity on the brave freedom fighters, young men are allowed to ride their motorcycles without a helmet! How do these guys expect to survive long enough to blow themselves up if they won't follow a few simple safety procedures? Is it any wonder there are so many work accidents? Don't touch those wires until we get there, it's not safe. No, I mean it, this is no joke, that's the rule. DID YOU HEAR --

Then there are the bus passengers who don't know even the simplest things that every four and five year old in other societies knows: you'll get your arm chopped off! Hey, as long as the trigger finger goes along with it, it's fine with me. I'm just thinking ahead to that post-election "100 day plan" when the Hamas Honeymoon is still in full swoon, that's all.

But most distressing, they have circus clowns roaming the streets out of uniform, with even their roomy clownmobiles well-over legal capacity: 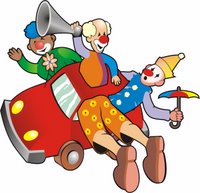 I can only hope Hamas will take any presumed victory seriously and hand out lots and lots of traffic tickets to generate revenue with which to fund parks, after school programs, and midnight basketball. Any chance of that working out?