I think I need an intervention. I told myself I would lay off the newswire photos for today -- just one day! How hard could that be. The first step is admitting you have a problem.

That said, I stumbled across a Reuters photo showing a cartoonist, who happens to be Palestinian, preparing a cartoon of stricken Israeli Prime Minister Ariel Sharon: 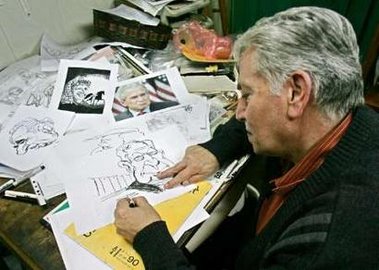 But why not do just one little itty bitty google to see what Reuters' hand-picked cartoonist does when it's not time to show off for the camera. You know, just to find out what kind of framed cartoons are probably hanging up all over the walls in that very same cartoonist's office, in the spots the camera has chosen not to look. It's probably olive-branch of peace stuff, perhaps with a little bit of the same humorous cynicism I try to bring, only from the opposite end of the spectrum.

Assuming the name Al-Bukhari isn't Arabic for "Anonymous Cartoonist," here are a couple of the Ariel Sharon cartoons Mr. Al-Bukhari must be most proud of: 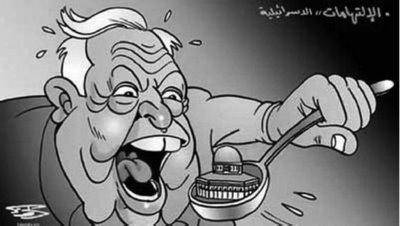 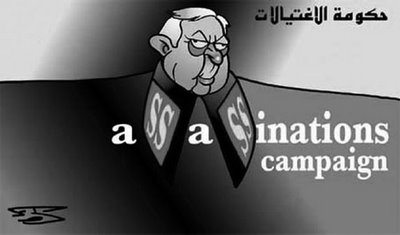 Funny. I wouldn't have known that Ariel Sharon eats a breakfast cereal that includes little marshmallow chunks shaped like the Al Aqsa Mosque, and that he played shortstop for his army unit's baseball team. We all owe Mr. Al-Bukhari a debt of gratitude for bringing this heart warming information to light, and to Reuters, for their unfailing taste in identifying such worthy targets for their spotlight.

Perhaps I'm being unfair. Perhaps there are no Palestinian cartoonists who haven't slung the SS slur from time to time, and so Reuters had no alternative in its selection of an artist to feature. But when the suicide bombers' aristic advocate draws stuff like this, I can't help but think its a bit of the pot calling the kettle a Nazi.

Clearly I lack the philosophical flexibility necessary to work for Reuters.