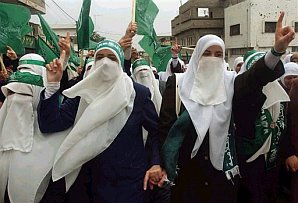 Think about it. What would these women have to celebrate about a Hamas victory in municipal elections? Sure, their husbands can continue their suicidal jihad against the Jews, confident that a Hamas-led school board back home will help train another generation of shaheeds to take their place. And as Hamas grows in influence, there is always the chance that the martyr stipends will become tax deductible. But does that merit a parade by these women -- women who need a chaperone just to go blow themselves up? Puh-lease.

So I looked at the picture a little more carefully, spider-sense tingling, trying to deduce what's really going on here, because obviously these women are very repressed and can't just come out and say what's on their mind. Sure, they're yelling "Death to the Jews", but they can't really mean that. It's obviously just a cover for the deeper, subtly encoded subversive messages they really want us to hear.

So I got out my old Super Sleuther Secret Spy kit to start ferreting out the deeper meanings hidden in this photo. Here's what I found: This may be the first Lesbian Rights march ever held in Palestinian territory. Yes, that's right. You go girls.

Don't believe me? Well what about this telephoto super-digital enhancement: 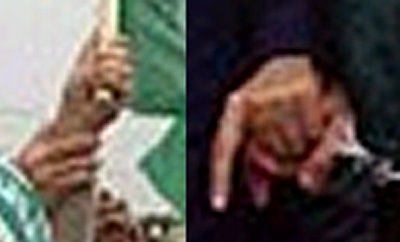 Sometimes when they touch, the honesty's too much. Can I get an amen from the worldwide liberal supporters of the right of Hamas women to love, really love, each other? I've been waiting for this moment for so long, the awakening of the spirit of radical feminism as the antidote to radical Islamism, that I'm almost worried I'm not being objective. I couldn't possibly be reading too much into a single photo, could I? I wouldn't want to do that. So to be sure, I decided to dig deeper, to use every last tool of espionage and analysis at my disposal.

Now lets see, what other tools do I have? Hmm. Oh, I know. I'll do a vibration analysis of the windows and on the billowing fabrics of the womens' veils. Then I can process it using the Langley super secret audio decoder and figure out what the background sounds were. That should allow me to objectively verify my hypothesis.

Ok just a moment, have to wait for the output from the supercomputer... there, it's spitting out a tape ribbon... now just feed that through my decoder...that's it! Just as I thought.

We are family... I got all my sisters with me

It's right there, in black and white (my color ink cartridge dried out). Also says there are echos of an empowering Melissa Etheridge medley. I'm feeling a surge of hope that maybe this is it, the first signs of the awakening. But wait, that's still not good enough. There's always the chance those songs were only being blasted from an Israeli helicopter as a psy-ops manuever aimed at creating the misleading impression of a burgeoning womens' movement within Hamas. I've got to find a better way of objectively determining whether this is just another "Death to the Jews and No New Taxes!" march, or if it really is the leading edge of a feminist blowback wave, ready to sweep through and pacify the male Hamas infrastructure.

I'll try Facial Analysis and Reconstruction Technology (with advanced veil compensation) to see if it can show anything about who is leading this rally. First let's zoom in: Then we do a hair sample fibre analysis to deduce color and style choices: We're getting close now, I can almost see it. All that's left is the veil compensation, and: Just as I thought! This is why I blog, the exhiliration of the big breakthrough, when it finally all makes sense!

There was no response from Ellen Degeneres to attempts to contact her for corroboration of the story because, frankly, we didn't try to contact her -- as if they would let her talk to us! We could be putting her in serious danger if we forced her to come out publically about her efforts on behalf of Hamas women.

But sometimes to a crack investigative journalist, the silence speaks louder than words, don't you think?