When you believe your cause is just, everything is protest. 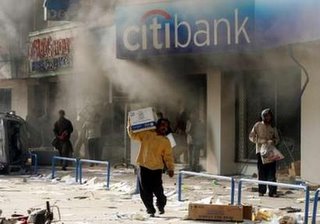 Pakistani protesters loot stores in Lahore February 14, 2006. Police used tear gas to drive out students who stormed into Islamabad's diplomatic enclave on Tuesday and protesters attacked Western businesses in Pakistan's most violent reaction yet to cartoons of the Prophet Mohammad. REUTERS/Mian Khursheed

In America, stores are looted by criminals called "looters." But Islamic agents of chaos cannot be described with infidel terms. It's not like these Pakistanis are reacting in the crass manner of, say, American Super Bowl celebrants or race rioters. No, this is a highly principled stand against the insensitive Western depiction of the Prophet.

Unfortunately, even though these peaceful protestors have already been driven to threaten, burn, kill and destroy, it hasn't been enough. Where is the evidence of any Western lessons learned? Mumble and flinch, "I'm sorry you're upset," apology-style statements cannot quell this righteous rage. Have any cartoon heads rolled? If the protestors are not understood soon, what alternative is left but Habeus Headless Corpus?

So we should be glad to see looting in the name of the Prophet, a last-ditch cry of anguish before the knives come out. In their protest-looting, they peaceably offer us one more chance, reminding us it's still not too late to cave.

I shudder to think how upset they'd be if they knew you were buying Danish.