The new Hamas "Kids Fashion Catalog" is out! 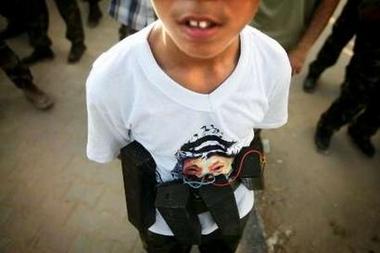 A Palestinian boy wearing a t-shirt with picture of the late President Yasser Arafat and a fake suicide bomber belt attends a gathering to celebrate the Israeli pullout from Gaza Strip in Gaza City September 1, 2005... REUTERS/Damir Sagolj

What fashionable young Palestinian boy could resist sylin' in this white, short-sleeve V-neck tshirt with the cool picture of Arafat -- the Che of a new generation. And don't forget to accessorize with the realistic looking fake suicide belt. Moms, don't let your child be the last kid on the block to strap one on. Did we mention this year's line of youth suicide belts comes in six distinctive colors and fabrics, with adjustable straps so one size fits all? Fine print on each wire announcing "doesn't explode" in both Taiwanese and Arabic guarantees your child's safety when playing near armed soldiers.

Pull the trigger on this deal before midnight tonight because these suicide belts are selling fast. Your child shouldn't be caught dead without one.